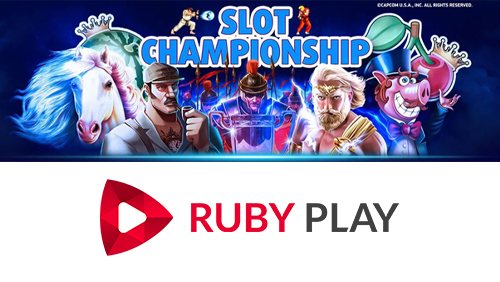 Msida, Malta – 10th July 2020 – For the first time in their young history RubyPlay, entered their slot “Quest of Gods”, into the £100,000 Slots Championship at Lottoland. Being a newcomer they hoped for a good showing in its Quarter Final encounter against the legendary “Gonzo’s Quest” but it surpassed expectations by not only winning, but winning by a strong margin of 83% to 17%.

Next up in the Semi Final – an even tougher prospect – up against 2019 Champion, “Mustang Gold”. In a much tighter encounter, “Quest of Gods” again caused an upset by winning by 55% to 45% – setting up a final against “Holmes and the Stolen Stones”.

By this stage everyone was expecting a close run in the Final round – and it didn’t disappoint! “Quest of Gods” took an early lead on day one against Holmes and the Stolen Stones, but over the week, the game clawed back to eventually pip the RubyPlay game to the win by 51% to 49%.

Ittai Zur, Chief Operating Officer at RubyPlay said “As a new player in the slots market it was a great honour taking part in the Slots Championship with Lottoland. We also knew it would give us a good idea of how our games compare in terms of popularity with some of the biggest slot developers, competition that we have a lot of respect for.

We are delighted with how “Quest of Gods” resonated with Lottoland players, and to only just miss out on being the Lottoland Slots Champions of 2020 was incredible.”

Anthony Morris, VP Gaming & Sports at Lottoland had this to say “We knew that Quest of Gods was popular with our players at Lottoland, but to be honest we didn’t think it would do as well as it did against some smash hit content from other major providers. We look forward to more great games from the team at RubyPlay over the coming months and years”.

For more information on the Quest of Gods slot, go to https://rubyplay.com/games/quest-of-gods/

RubyPlay is a progressive and energetic iGaming development studio that specializes in the design and creation of the most entertaining and engaging slot games, as well as value-add tools for gaming operators. RubyPlay was founded by a group of industry gurus and has evolved into a “Gem” of the iGaming industry!

RubyPlay’s passion is to make the most entertaining and innovative slot games possible. We provide a premium quality experience using HTML5, giving cross-platform compatibility over a full range of devices.

You can’t just be good. You’ve got to be great. And that’s what we strive for every day.

Learn more about RubyPlay at rubyplay.com