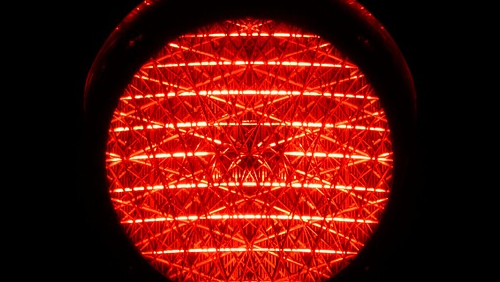 A red light has a number of connotations, most often associated with negativity – red stop light, red warning light, red-light districts, etc. However, a new study puts red light in a positive light. Appearing in The Journals of Gerontology (paywall) this week, researchers have discovered that exposing the eyes to a few minutes of red light each day could help them remain healthier longer, keeping eyesight in better shape as we get older. If future studies can confirm the results, the implications are fairly big.

In “Optically improved mitochondrial function redeems aged human visual decline,” better eyesight can be maintained over the years just by spending two or three minutes a day looking at a “deep red light.” The researchers, which include Harpreet Shinhmar, MSc; Manjot Grewal, BSc; Sobha Sivaprasad, MBBS, PhD; Chris Hogg; Victor Chong, MBBS, PhD; Magella Neveu, PhD and Glen Jeffery, D.Phil, surmise that the light has a positive impact on the health of mitochondria. As a result, the eyes become stronger and, since mitochondrial decay is associated with a number of diseases, this could also lead to the creation of new treatments for a number of ailments, including diabetes and more.

The researchers explain, “Mitochondria influence the pace of ageing as the energy they provide for cellular function in the form of adenosine triphosphate (ATP) declines with age. Mitochondrial density is greatest in photoreceptors, particularly cones that have high energy demands and mediate colour vision. Hence, the retina ages faster than other organs, with a 70% ATP reduction over life and a significant decline in photoreceptor function.”

It’s important to point out that the study was not an in-depth investigation into the effect red light has on mitochondria or sight. It was just a pilot study to test a theory, and involved two dozen test subjects – 12 men and 12 women – who were provided a flashlight that had a red light with a wavelength of 670 nanometers, just shy of the wavelength of infrared lights. For two weeks, they would look at the light for three minutes and researchers measured the eyes’ receptor cells, called cones, and retina cells, rods, to determine any changes. What the researchers found was that, after the two-week period, a 14% improvement in the ability to see colors was identified.

Subjects ranged in age from 28 to 72 and those above 40 saw better results. Sensitivity to cone contrast colors increased by 20%, and there was also a substantial improvement in rod threshold, the ability to identify shapes and objects in low light. This point wasn’t too surprising to the researchers, as explained by Jeffery, who is a professor of neuroscience with the Institute of Ophthalmology at University College London. He concluded, “The retina ages faster than any other organ in your body. From an evolutionary perspective, we fundamentally have never lived past 40.”

Should this initial study be verified by additional research, it could lead to acceptance by the Food & Drug Administration of new solutions for treating eyesight problems. Since a red light would be a simple therapeutic alternative, it could be used at home at any time, without significant expense.