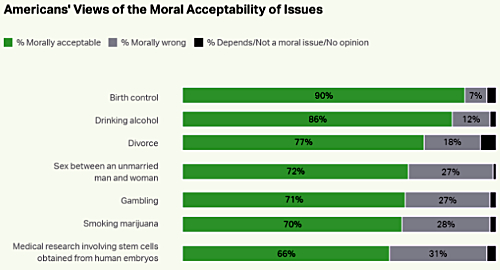 Gambling is losing its lustre as an immoral activity among Americans, despite conservatives’ view of gambling taking on a more pejorative flavor.

Gambling’s score continues to improve with time, having scored only 67% in the morally acceptable column just four years ago. The ‘morally wrong’ score was unchanged from that 2016 survey, although it was down four points from 2019, which represented a three-point rise from 2018.

The acceptable/wrong view was fairly evenly split on a gender basis, with 72% of men and 69% of women taking the acceptable view. The acceptable rating was also nearly identical across age demographics, although individuals who never went to college were far less likely (62%) to view gambling favorably compared to college grads (75%). Race also showed a sharp divergence in viewpoints, with non-whites’ support for gambling (60%) significantly below whites (76%).

Self-described Democrats (76%) were more inclined than Republicans (69%) to view gambling favorably, although this disparity was much more stark when viewed through the lens of individuals who described themselves as conservative (61%), moderate (75%) or liberal (78%). Nearly twice as many conservatives (36%) viewed gambling as morally wrong compared to liberals (19%).

The 2020 survey follows the rapid expansion of legal sports betting across the US that began in May 2018 after the US Supreme Court overturned the federal betting ban. Several states have also approved regulated online gambling in recent years, which may have helped the favorability rankings.