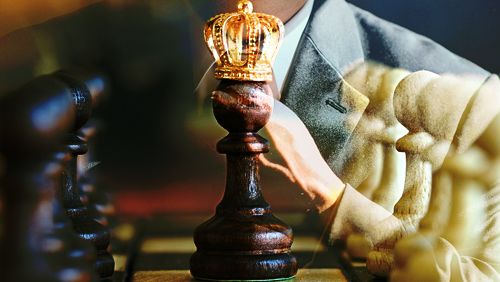 If, one month ago, you asked me what it would take realistically to push COVID-19 out of the headlines or at least demote the pandemic to a secondary topic, rioting and civil unrest would have come to mind. Well, it looks like we’ve gone from one extreme to the other. What were until just a few days ago mass lockdowns, are now mass riots. Suspending judgment on the justness of mass lockdowns and the current riots and just looking at the dry circumstances here, it makes sense that locking millions of people in their homes for two months would intensify riots once they break out for whatever reason. After finally being allowed out, some people will react with joy while others will react with anger, frustration and violence. That’s how humanity is.

So we’ve gone from lockdowns to riots. It’s like the world has malaria causing alternating fever and hypothermia chills. Nothing is in balance anymore.

The anger though is not just on the streets of inner city America. It’s festering in the upper echelons of the most powerful governments in the world, and the pawns in the middle are getting hurt. China is now tightening its grip on Hong Kong again with a new National Security Law, causing the Trump Administration, not the most circumspect group of people to say the least, to punish Hong Kong for being punished by China. As punishment for being punished, Trump is “starting the process” (whatever that means) of revoking Hong Kong’s special trade status with the United States. That basically means Hong Kong will now be treated as China and not as a separate entity, which means travel restrictions, visas, and any tariffs Trump forces on Chinese imports will also apply to Hong Kong now.

Even worse for business, Trump went farther and opened up another front line against Hong Kong and Chinese companies listed on the New York Stock Exchange.

As the mainstream media dryly put it,

Trump also said he was ready to take action to mandate that Chinese and other foreign companies listed on U.S. financial exchanges abide by American accounting and audit standards.

Complying with accounting standards sounds like a decent thing. But practically, it just means that US government bureaucrats are going to be digging around Chinese companies listed on the NYSE and harassing them. Xi Jinping is not going to like this very much, so if the Trump Administration acts all macho and really goes after Chinese NYSE-listed companies, the Xi Administration will act even more macho and go after American HKEX-listed companies.

Alternatively, we can all bury ourselves in fantasy land and imagine that Xi will be so scared by Trump’s awesomeness that he’ll back off Hong Kong instantly, issue a heartfelt letter of apology for curtailing the rights of Hong Kongers, and peacefully retire forever to an artificial tropical island he built somewhere in the South China Sea or something, dissolving the communist party and blasting out “Kumbaya” on an infinite loop throughout the People’s Republic’s loudspeaker system.

If I were Xi and I wanted to get rid of Trump with US elections in November, I would quietly, without making any bellicose announcements, go after Trump’s wallet. I’d go after his campaign financier. I’d go after Sheldon Adelson hard. It’s rather appropriate that Trump’s enabler is also a casino mogul, just a vastly more successful one that’s actually good at it. Las Vegas Sands is now a sitting duck in Macau, a big fat open target just begging to be harassed by Chinese bureaucrats. If Xi has any sense, and he does, he’ll make it very difficult for Las Vegas Sands to do business in Macau.

The world is changing so incredibly fast now that I see it as entirely possible that LVS could pull a repeat of what it did between October 2007 and November 2008, any time now. In just over a year, the stock lost 99% of its value. And it’s not just the politics either. Macau’s fundamentals now are much, much worse than what they were at the depths of the 2008 financial crisis, obviously as a result of the coronavirus, but just take a look at the crazy extremes here. Here’s monthly visitation to Macau since June 2007.

The pitzy little decline on the left side, from the end of 2007 into 2008, correlated with LVS’s fall from a high of $149 to less than $3 a share. The current fall to basically zero though, that hasn’t led to a decline any more serious than May to December 2018, or March 2014 to January 2016. Certainly, the absence of a total collapse in Macau stocks has to do with investors’ assumptions that business will go right back to normal once fear of the coronavirus fades.

But what if it doesn’t? From statistics just prior to the breakout of COVID-19 in November 2019, visitation to Macau from Hong Kong accounted for 20% of the total. If we count from before the Hong Kong protests of 2019, that figure was closer to 22%. If the Trump Administration follows through with its threats to eliminate Hong Kong’s special trade status, the Hong Kong economy will be squeezed from two directions, China and the US. That’s going to dampen Macau visitation at the very least.

Then there’s the real risk (I would argue absolute inevitability) of some sort of major financial cascade in the coming months as a result of an extremely weak European banking system. That’s why LVS lost 99% of its value in a year, not fundamentals really, which didn’t warrant a near total wipeout by themselves. Europe’s biggest bank by market cap, HSBC, is known to have substantial investments in Hong Kong real estate, and the bank is dealing with other serious problems like a record low share price and a new problem of massive losses on gold futures of $200M in a single day due to the rising gold price from all this money printing, and that’s just what’s being admitted.

These reasons alone are not enough to short Las Vegas Sands. But, add in the fact that Sheldon Adelson is now an obvious personal target due to Trump’s belligerence, and LVS could be in real trouble now. It’s a dangerous tight-rope walk, and betting on LVS is betting that everyone gets across without a hitch. I’m not saying it’s a certainty, but by the time 2021 is over, LVS could easily lose most of its value, just like it did over the course of 2008.