Home / Ventures / Spend nothing to get anything 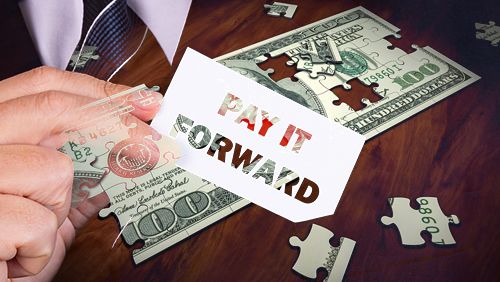 It’s Pay It Forward on steroids. In 2013, Rebecca Rockefeller and Liesl Clark had a novel idea. They started Buy Nothing Project that year, creating a chain of events that would explode into a worldwide phenomenon. The concept of the project is simple – let anyone ask for anything and receive it – for free.

Want a pair of earrings? Just ask. Need tickets to a concert or a sporting event? Just ask. Members can ask for anything and, if someone else is willing to give it up, receive it. There are some caveats though – there can’t be any bartering or trading, everything has to be legal and there can’t be any strings attached. Cherri Christiansen, who started her San Diego-based chapter in 2014, explains, “If someone is offering a mug, there’s no need to say I’ll trade you a hairbrush or I’ll give you this for that coffee mug, everything is gifted freely.”

She adds, “We grew to over 1,000 members within the first couple of years. We actually hit almost 2,000 and at that point, the group became so big, we split into smaller, more hyper local groups.” Not bad for having started with just one person in the group.

Rockefeller and Clark co-founded the project, which stems from a passion for volunteering and sharing. Clark asserts, “Most of us do have things we’re regularly throwing away or passing it on, whether clothes kids have outgrown or we’re an older couple and we want to downsize or simplifying and want to get rid of excess things or your dog dies and you have the materials and you’re not getting another dog.” It makes more sense than tossing them out onto a junk pile.

Today, there are almost 1.5 million members in over 30 countries. 6,000 groups have been formed worldwide and each one of these has about 7,000 volunteers. The idea was to promote a share economy, and it has paid off greater than anyone could have possibly imagined. Rockefeller adds, “Our mission is to foster local gift economies where everything is given freely without any expectation of reward or return and no limit on giving or requesting. The more that we act from a place of generosity and wanting to care for each other and commodify and monetize that the stronger our communities are, the more we free cash up in families that are struggling financially.”

With the current coronavirus pandemic forcing many people out of work, the Buy Nothing Project has taken on a whole new meaning. More than ever, people are looking for ways to maintain some semblance of order in their everyday lives while having to be more frugal with their money. Because of Clark’s and Rockefeller’s dream, those individuals are able to make it happen.

Finding an iGaming Job in a recession – Staying Sane
Bill Beatty
20 May 2020
.