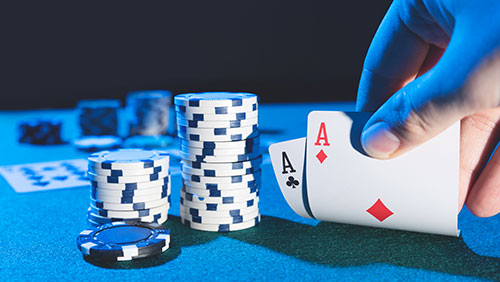 By the time the final table was reached, the last nine players were convening at the virtual felt with the sun coming up in Europe. The amusingly-named ‘800-522-4700’ was chip leader with just over 5 million chips, but they didn’t do the first damage.

The player who left the final table first was the unfortunate ‘Sub_Zero’, who endured the misery of a cold deck when all-in and at risk when Patrick Leonard a.k.a ‘Babu$hka’ moved all-in from the big blind and Sub_Zero called. The latter had the goods, with pocket nines ahead of Patrick Leonard’s ace-trey, but an ace on the flop, another on the turn and no nines or running cards across the board reduced the field to just eight hopefuls.

Busting in 8th place for $249,920 was ‘gaufreancienne’, who moved all-in pre-flop with pocket queens only to have run into a brick wall with ‘HotPot44’ calling it off with pocket aces. There was no drama over the nine-high board but shortly afterwards, HopPot44 lost a big hand with the better hand, ace-trey going down as ‘M0therLover’ holding king-ten. An ace and king on the flop saw HotPot44 remain in the lead, but another king on the river sent HotPot44 sliding down the counts.

It was ‘AlwaysWithNuts’ who busted in 7th place, however, as HotPot44 got right back into contention in a big way. AlwaysWithNuts had committed their chips with 8-7 and HotPot44 made the call himself with king-ten. Again it won the hand, as a king on the flop ended AlwaysWithNuts hopes of glory.

With just four players left, there was a clear leader in the pack:

Shortest stack of the four, ‘BlackPhillip’ was first to bust, with their all-in with jack-queen dominated by 800-522-4700’s ace-queen. No cards that could help either player hit across the T-2-7-5-K board and BlackPhillip was out in 4th place, taking $865,750 for a great run.

It was HotPot44 who busted in 3rd place, earning a massive $1,181,110 when their all-in mov for just 3.3 million chips with a suited eight-six was called by Patrick Leonard’s ace-nine. A flop of 5-K-4 gave HotPot44 a gutshot, but another four on the turn wasn’t what they needed and an ace on the river confirmed that play was heads-up.

Leonard got off to a decent start to heads-up play, advancing their stack to 9 million chips against 800-522-4700’s 16 million after a shove on the river precipitated a fold from the leader. In the next big hand, however, Leonard’s river bluff was called off by 800-522-4700 as Leonard’s open straight draw on the turn which had bricked the river fell to 800-522-4700’s top pair nines with the eights on board. The stacks returned to how they sat at the start of heads-up play.

Patrick Leonard made his fatal final move when they moved all-in over 800-522-4700’s limp. Leonard held ace-four, but had run into a monster, as 800-522-4700’s pocket kings were miles ahead. The queen-high board paired Leonard’s four, but that was as good as it got as 800-522-4700 got the win and won a massive $2.1 million for one of the most prestigious and money-spinning online tournament titles in recent times.

Patrick Leonard, meanwhile, was determined to get some sleep before heading back to the online felt.

2nd in @GGPokerOfficial He for $1.6m. 6 day twos starting in around 5 hours so going to get some sleep! #wegoagain