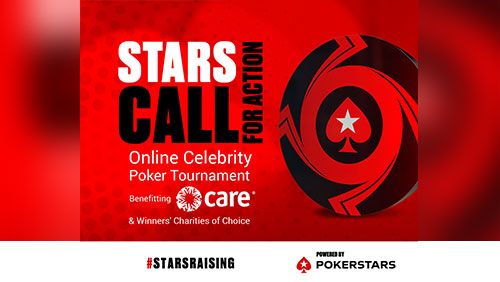 Stars of stage, screen, sports and music have come together and filled every seat in Stars CALL for Action – Powered by PokerStars, an online charity poker event conceived and brought together by actor Hank Azaria and journalist, author, and screenwriter Andy Bellin.

The special online poker tournament is raising vital funds for relief efforts during the current global crisis and will be hosted at PokerStars and broadcast live on Twitch, Facebook and YouTube on May 9 at 2pm ET.

Poker fans can also place a bet on which celebrity they think will take down the tournament in a special PokerStars Sports market. Professional poker player Erik Seidel is the 10/1 favourite, with Don Cheadle the top celebrity at 25/1. All money bet on the market will be donated directly to Care International.

And it doesn’t stop there, viewers will be able to win autographed merchandise and a variety of special surprise experiences during the Twitch stream.

During the tournament, viewers will be able to contribute to the cause via a ‘Donate’ button on their streaming platform of choice. The top placed celebrities will direct their portions of $1 million, donated by PokerStars, to a charity of their choosing and take home exceptional bragging rights. Fifty percent of the total donation will go directly to Care International on behalf of those playing, as well as all proceeds donated via live stream. Grants to charities will be administered by the Entertainment Industry Foundation (EIF), a Charity Navigator Four-Star Charity that meets all 20 BBB Charity Standards.

For more details about the tournament and who else is playing check out the PokerStars Blog.