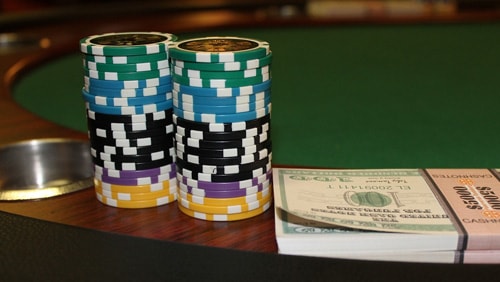 Kevin Allen is a renowned cash game professional from London. The Tottenham Hotspur supporter has also won huge live events, such as the GUKPT London Main Event for £158,700, which featured Will Kassouf, Ben Jackson and Matt Davenport at the final table.

Renowned for his dedication to poker, he is as tough as they come at the felt, but the ultimate happy family man away from the poker table and his cheeky smile is his regular pose among the Brit Pack on the rail whenever he’s not at the final table himself.

How will Kevin Allen deal with our 15 bigs, though?

A home-made curry by the missus, she could bring it along in the slow cooker while they were loading the rifle alongside an ice cold cider!

Only Fools and Horses. No many how many times I watch episodes, they never fail to make me laugh.

There’s Only One Clive Allen. School books aside, it was the first book I ever read. It could keep looking at pictures of some of the family [Kevin is related to Clive]. They’d lift morale until I was rescued.

That’s positive thinking. What’s the song you could listen to on repeat forever?

We have to agree on that one.

Las Vegas. It’s the most amazing place to play poker. There’s nowhere else in the world that you could win a big pot off someone in a cash game and they high-five you and say what a great hand it was!

I took the family to Egypt once, Sharm El-Sheikh. It was the most beautiful place I’ve ever been. Taking the kids out snorkeling and spotting Moray eels; we all still talk about it to this day.

This one is easy! I still absolutely love poker. No way could I go a whole year without playing the beautiful game.

My Grandad. He was a gambler all his life. He passed away a few weeks before I had my biggest score at the time at Dusk Till Dawn. It still hurts me to this day that he wasn’t around to see it as he would have been smiling from ear to ear looking at the cheque.

There’s not anyone I would like to meet; I’m not a person that gets giddy when I see a celebrity.

It’s very hard to put me on life tilt. No matter how bad things get, I always try and stay upbeat and positive. You have to be when you have three kids, as they are always watching and learning from you.

My brother Richie. He’s played the Main Event before and has a very decent no-limit hold’em game. He also has a lot of gamble in him and wouldn’t be afraid when the big money came into play.

My mindset for sure. I don’t tilt and I battle on whatever the game throws at me.

My biggest leak without doubt is bankroll management. I’m always over spending and when I’m flying I’m constantly looking out for others as I hate seeing other people have money struggles.

To scrap the 40-hours a week workload. Let’s all have a long lay-in!

I would call my beautiful girlfriend Rachael and tell her how much I love her and the kids.

For a hard man to beat the table, what a softie he is at heart. You might want to avoid getting into a pot with him in cash games because he’s such a pro, but you can follow Kevin Allen on Twitter and enjoy his thoughts on poker and sports. We reckon he used his 15 bigs well, doubled up and soon made chip leader!