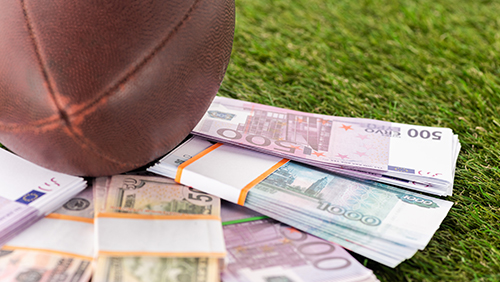 The sportsbetting market for the NFL Draft is always one that lights up anywhere with a gambling licence. Experts make their top picks, rumours abound and the players themselves are caught up in a whirlwind of excitement and probably no few nerves as they await the final decisions that will shape their careers.

When it comes to looking for value on the betting platforms you know and love, everyone loves an outside picks, but you might want to even up your risk by looking at one of the most favourable odds-on picks. We’ve broken down the top five for you so that you can make your selection.

1. Chase Young to be drafted by the Washington Redskins (1/5)

When it comes to the Washington Redskins, it’s an open secret that Ohio State edge rusher Chase Young is in the centre of their radar, beeping and flashing. In fact, so much so that last night, a photshopped image of Young already wearing the famous burgundy and gold went viral on Twitter:

It’s highly likely that the Redskins take Young, even if they have others areas of concern. Despite a lot of money already having been invested in players such as Daron Payne, Jonathan Allen and Matt Ioannidis, Chase Young can occupy two or three linemen at a time, and is as good a prospect at applying pressure to the opposition as anyone and could elevate the Redskins far more than simply in his position.

While Chase Young is almost certain to be second pick, Joe Burrow is rumoured to be an absolute lock for the Cincinatti Bengals as first pick in the NFL Draft. If that’s true, then the 2/9 odds aren’t bad value at all.

Burrow himself has been politely neutral on the matter, saying back in February, “I’ll play for whoever drafts me.” The Heisman Trophy winner may have sounded noncommittal about joining The Bengals, but the rest of the NFL would be amazed if the Quarterback doesn’t end up in Cincy as first overall pick. As he said in the Spring, it’s been his dream to be first pick since he was a child. That dream is overwhelmingly likely to come true. Here are some his Heisman Trophy highlights:

3. Denzel Mims to be drafted before Jalen Reagor (1/4)

Rumoured to be the Green Bay Packers first pick, and almost certain to be right at the top of most pundits’ second round tips, 6 foot 3 catching machine Denzel Mims is a hot favourite to be picked before Jalen Reagor. Mims, a wide receiver, impressed everyone at the 2020 Senior Bowl and since then, his reputation has only grown.

While Reagor – the son of NFL veteran Montae Reagor – will appeal too, as he is said to be one of the best receivers in this year’s NFL Draft, Mims has posted over 1000 receiving yards in two of the past three seasons, and a minimum of eight touchdown in each of those years, with NFL insider Ian Rapoport commenting on Mims after his stunning Senior Bowl performance.

4. Tua Tagovailoa to be drafted by Miami Dolphins or L.A. Chargers (1/4)

Believe it or not, there was a time when Tua Tagovailoa was the frontrunner to be first pick in the 2020 NFL Draft, but a troublesome hip injury took him out for the season. So much so, according to some experts, that Oregon’s Justin Herbert might well be picked above him in the Draft.

That’s still unlikely to happen, however, as it seems that late concerns about Tagovailoa’s injury might be unfounded when it comes to relegating him to a second pick – the delay to a season starting positively impacts anyone returning from a lay-off – and both the Miami Dolphins and Los Angeles Chargers could do with his talent on the field judging by these highlights.

5. Over three quarterbacks drafted in first round of picks (1/4)

With Joe Burrow and Tua Tagovailoa so certain to be first round picks that they can practically draft their social media tweets now and leave their families to send them as they party at a safe social distance, the odds are in your favour that a third quarterback makes the first round pick too.

You’re really only betting on one more QB to make the first pick grade, and as has been explored in this New York Times column on the top 10 quarterbacks in this year’s NFL Draft, there are plenty of names to pick from, with Justin Herbert joined by Jordan Love and Jalen Hurts. All are potentially devastating signal callers that will arrive in the eventual 2020 NFL.