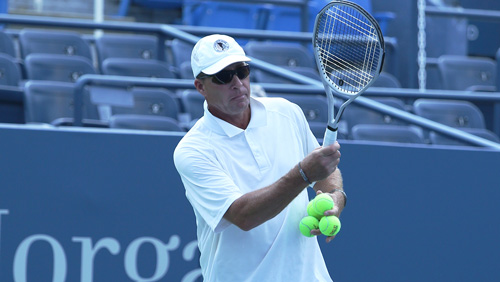 We live in a time where all the tennis greats hail from Europe. Where once we loved the American icons such as Pete Sampras and Andre Agassi or worshipped the Antipodean artistry of Lleyton Hewitt or Pat Rafter, we now look up to the Holy Trinity from the European countries of Spain, Serbia and Switzerland. Rafael Nadal, Novak Djokovic and Roger Federer have changed tennis history and given the game a future where other European players will have to reach the top of their craft to live up to the reputations that preceded them.

Three decades ago, three other European heavyweights redefined the era in which they played. German phenomenon Boris Becker, Swedish serve & volley specialist Stefan Edberg and clay court craftsman Ivan Lendl all commanded huge respect as they carved out careers that stand up to scrutiny today. We conclude our look at three men who reshaped the sport they played in by focusing on a player from the former Czechoslovakia who ripped up the rulebook and grumbled his way to eight Grand Slam titles across a completely unique sporting career – Ivan Lendl.

To say Ivan Lendl was unique is perhaps too baseline a comment. He was a clay-court baseliner in an era of serve-volley powerhouses like the aforementioned Boris Becker and Stefan Edberg. Michael Stich was another who chose the path of power and pace above finesse and all-court fitness. But it wasn’t just the era during which he lived that Ivan Lendl played against type, it was the era before him and after him too. He was an anomaly, and as such should not have been successful. Uniquely, he was incredibly fruitful when to outsiders and fans, it almost seemed to be the if not impossible then counter-intuitive method of being so.

Lendl’s career began with junior stardom, with tournament wins at the French Open and Wimbledon before the Czechoslovakian turned pro in 1978. Success wasn’t instant – Lendl was no Becker – but he clambered up the ranks. Lendl reached his first Grand Slam final in 1981, making it to the final at Roland Garros. Lendl would lose in five sets to Bjorn Borg, but lessons were learned and a desperate ability to hang in sets and matches at the highest level was born.

Oddly, Lendl experienced a huge amount of success at the U.S. Open, despite being most naturally a clay courter, preferring to use vicious, low-hanging topspin forehands from the back of the court to pin his opponents back and open up the court for his precise passing or line shots.

Reaching the U.S. Open final in 1982, Lendl was defeated again, this time by Jimmy Connors, and after Mats Wilander beat him in the 1983 Australian Open final, Connors again got the better of him at Flushing Meadow. Four finals and no Grand Slam win – it was a run that would have finished many lesser men, but Lendl was the master of perseverance and that was proved to be profitable when he finally sealed the deal, winning the 1984 French Open, defeating John McEnroe. In what was a final of two halves, Lendl was two sets and a break down before mounting the most amazing of comebacks, eventually winning in five.

With two more French Open victories in 1986 and 1987, Lendl also won three consecutive U.S. Opens in a row, with this win in the 1987 U.S. Open quarter-final against John McEnroe on his way to winning his third Flushing Meadows title in a row typical of his success during the astonishing period of Transatlantic success.

Lendl had proven that even in an era of serve-volley tennis, he had the game to compete on any surface. No-one’s game on its own merit was perhaps as strong as his, but Lendl would experience the impact of the most dangerous enemy any sportsman or sportswoman can face – Father Time.

Michael Chang’s shock five-set win in 1989 on his way to becoming the 1989 French Open champion was something that Lendl found difficult to take, especially as he’d won the Australian Open final for the first time just a few months earlier.

While Lendl would win the 1990 Australian Open final too, defeating Stefan Edberg as the Swedish player retired through injury when a break down at one set each, he would only reach one more Grand Slam final, losing the 1991 Aussie Open final to Boris Becker in 1991.

Becker was Lendl’s true nemesis throughout his career, the German beating Lendl in all three Grand Slam finals they played against each other. Lendl would retire in the final days of 1994, citing terrible back pain as the main reason. A phenomenal career of eight Grand Slam titles, 94 singles titles, 270 weeks as world number one and seven year-end championships was over.

After being a professional tennis player, Lendl coached Andy Murray and mirrored his own breakthrough win, helping Murray break his losing final record when the British number one triumphed against Novak Djokovic. Lendl, as he always was during his career, cut a surly figure in the team box, satisfied if never ecstatic.

It was the way he lived his tennis career, and it carried him to success that in some ways, he should never have been able to achieve in his era. Defying the players who favoured the serve-volley style during his time, Lendl proved that if you have your own style but perfect it beyond the capabilities of those fighting against you, you can achieve anything.