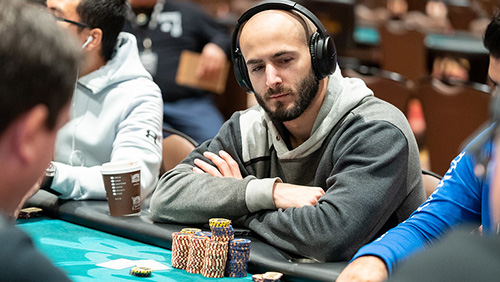 Great players win great poker events, but so few win the same poker event twice. That is the magnitude of Brian Atman’s achievement as lightning struck twice for the WPT Lucky Hearts Poker Open on Wednesday evening when he won the same event for the second time.

Altman’s latest victory came in the well-attended Main Event, which had 843 entries and cost $3,500 to enter. The final day saw just six players still in the hunt for the top prize, and it was Altman himself who went into play with the chip lead as he looked to win the event that he took down in 2015, that time for a career-best score of $723,008.

It took two dozen hands for the first exit, and Altman wasn’t involved at all, as John Dollinger raised under the gun and was called by Peter Walsworth in the big blind. Walsworth check-shoved the 3-2-2 flop and got a call from Dollinger, who tabled pocket nines. Walsworth had been making a move with ace-seven and had no flush draw to improve his chances. With a five on both the turn and river, he was the first player to check out, cashing in 6th place for $98,686.

The next elimination owed it all to position, with Altman shoving from the small blind with jack-ten offsuit. He was automatically called by the short-stacked Nadeem Hirani who held ace-king offsuit, but the board was kind to the chip leader, a ten on the flop and no other drama leading to Hirani leaving the table.

Altman was on a roll, and less than a dozen hands later, he was busting another. Nadya Magnus needed to double-up, so moved all-in from the big blind with ace-queen. Altman, who had already called a button raise from the small blind, had an easy call with ace-king, and the ten-high board saw the field reduced further, Magnus cashing for $171,642.

With just three players remaining, the action favoured the brave, with John Dollinger taking a big lead. By the time he eliminated Chanracy Khun in 3rd place, he would have 20 million chips to Altman’s 12 million. Khun had called for his tournament life with ace-deuce pre-flop, and it was the correct call. But Dollinger’s ten-eight of hearts found a ten on both the flop and turn to bring play to the eagerly-awaited heads-up duel. Altman was the favourite with six remaining, but now with just two left, Dollinger had the lead with 220 big blinds in play.

Altman worked his way into the lead in double-quick time, however, in a massive raised pot that never saw the river, two sixes and a deuce on the flop getting plenty of chips committee, Altman bullying Dollinger off the pot on the five turn-card. It was the sign of things to come, as eventually, over the next 40 hands, a titanic tussle ended when Dollinger got his last nine million chips into the middle. Dollinger had ace-eight, but he’d marched into Altman’s pocket aces, and the king-high board saw the latter proclaimed as champion.

“This is incredibly special,” Altman told WPT reporters after the tournament. “It’s amazing to be the first person to win the same WPT event twice and cement myself in history with this event. Winning a second WPT title feels amazing.”

Altman, who also took the lead in the WPT HUBLOT Player of the Year race, will look back on the event with huge pride, especially given the quality field he had to wade past in order to become the double Lucky Hearts champion.