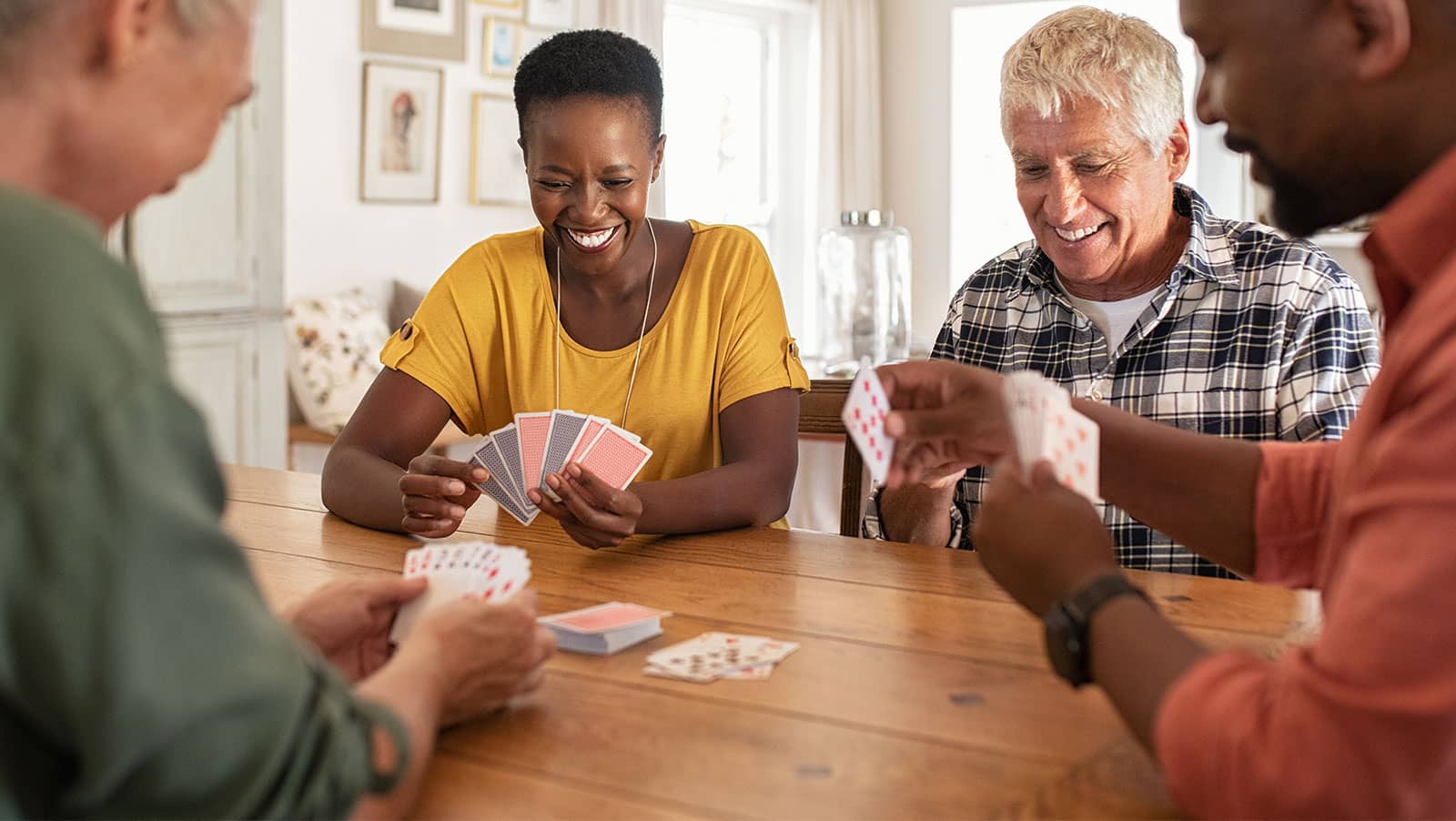 Christmas is a natural time to play card games. There is often a captive audience of family or friends waiting in your house, coupled with a gnawing sense of time needing to be filled. Into that gap, playing cards fits brilliantly.

Christmas in my childhood home was a thing of wonder. The traditions I enjoyed were plenty and each one warmed the heart. There were presents from family members to add to the ones dropped off by the big man wearing a white beard and a red coat, there was roast turkey and of course there were bad cracker jokes.

But best of all, there were the after-dinner traditions. Chocolates, nuts and desserts fought for stomach space after that roast turkey. Dad would light a cigar—the only time of the year he’d smoke at all—and I can still smell it now when I think of it. Everyone’s favourite moment, however, was when a pack of cards came out. The games we all loved would always get played, the only thing that changed was the order.

Here are three of my favourites:

An incredibly simple game, Old Maid centres around the aim of not being the player left with the ‘Old Maid’ of the title and therefore doomed to spinsterhood, at least according to the family, for another year.

Old Maid is very easy to play. Before the game, you remove three of the four queens from the pack. We used to leave the queen of spades in the pack because she looked so morose, but that’s your choice. Now you shuffle and deal out the pack equally among your players. Looking at your own hand, you can discard—face up so everyone can see—the pairs you are holding in your hand.

Three of a kind is no good, only pairs of cards can go into the middle. Then, the youngest player offers their cards face down to the next player who sits clockwise around the table from them. That player takes a card at random—though you start to watch for physical tells as to whether they are holding the Old Maid or not—and if that player makes a pair, they discard it into the middle as before the main gameplay. They then in turn offer their face-down to the next player.

Eventually, only one player will be left holding the unpairable Old Maid. Cue merciless mocking for all time.

While similar to Old Maid in the respect of the aim of the game being to rid yourself of all your cards, rather than there being just one loser, this time there is a single winner of the game.

All the cards are dealt out equally to the players after being shuffled. Each player then in turn from the youngest and going clockwise, lays face-down a card or cards, in order, starting from the ace. These cards form a pile in the middle of the table. The first player might declare “two aces”, laying their two cards into the middle of the table, face-down.

But what if you don’t have any of the corresponding cards to your turn, I hear you ask?

Well, you Cheat, of course.

Of course, herein lies the genius of the game. It’s very simple. If someone around the table thinks that the card(s) laid down by the player whose turn it is then they can accuse ‘Cheat’. If they were right to call cheat and that player was laying down cards that don’t match the order, then the ‘Cheater’ must pick up not only their own cards, but all the cards on the pile.

However, if the person who declares ‘Cheat’ was wrong to do so and the player actually put down exactly what they declared, then the person who called ‘Cheat’ picks up the pile.

The first person to get rid of all their cards and survive that final, inevitable accusation of ‘Cheat’ wins the game and in doing so is pelted with empty Quality Street wrappers.

Achingly simple once you have the knack, this one was my favourite, despite it not being centred around pure comedy like Old Maid and Cheat. There are many variations of Whist, but this was my favourite and I think it’ll be yours if you give it a chance.

The number of rounds of action you play depends on the number of players taking part, so if there are four players, then you play 13 rounds, because 4 x 13 is the 52 cards in the pack. If there are six people playing, then you can only play 8 rounds because 6 x 8 is 48, and to go past that would outscore the pack.

Each round, you deal out the cards, and then each subsequent round, deal one less card each. So, for example, with four players, you’ll each start round 1 with 13 cards each. In the next round, you’ll have 12 cards.

Each round, you’re playing to win these ‘tricks’ whereby one player leads a card—to the left of the dealer helps keep it organised—and this dealer moves round like a poker button each round. One suit is nominated each round to be trumps, which always outranks any other suit.

So, if hearts is trumps and someone leads with the ace of spades, and two players throw away weaker spades, you can ‘trump’ that ace by playing a heart and winning the hand. However, you many only play a trump—or throw away a different suit—if unable to play the same suit as was led by the starting player. You must follow suit if able to do so.

Right about now, you’re considering abandoning these instructions and playing another game of Cheat, aren’t you? I understand… but persevere, it’s worth it.

The genius of Nomination Whist lies in the name. Before each round is played, each player must, in turn from the left of the dealer clockwise, nominate how many ‘tricks’ they believe they’ll win.

Each round, of course, you are all dealt one less card until the final round, where each player is dealt just one card. If the win is still on the line at that point, whoever is left of the dealer and had to go first is vital, and the end is often thrillingly climactic.

Anyway, enjoy Christmas and remember, if you can bluff in poker, you can pretend you’re not the Old Maid. If you can hero call, then you can win at Cheat. If you can outlast your family at Nomination Whist, then you could win the WSOP Main Event.