With one week to UK Elections, a look at Rank Group

Just as I finished gathering my notes for an article on Rank Group, U.S. stock futures tanked and gold zoomed higher. Sure enough, the breaking headline: “Trump says it might be better to wait until after 2020 election for a China trade deal.” Maybe now it’ll start to sink in for equities. There is no trade deal on the horizon, not before 2020 and not after. If Trump is reelected in 2020, he’d have no reason to sign one anyway. Even if there was going to be a deal it would only have been symbolic. 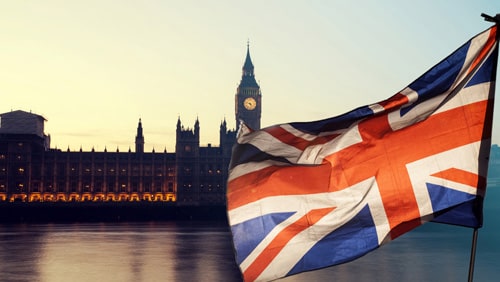 Also this morning, Trump goes back to tariff threats against France, Brazil and Argentina of all places, as if they have it so great in Argentina that the struggling United States needs to tax its own people just to level the playing field against those Argentinian fat cats. They competitively devalued the peso I guess, to give them an export advantage or something, the peso down 95% against the dollar since 2008. I’m sure they’re all living in mansions now over there and could spread the wealth a bit more.

Hours earlier the South China Morning Post was out with an article about how Trump admits that the new Hong Kong Human Rights and Democracy Bill wouldn’t make trade negotiations any easier. If you look at the practical implications of the bill minus the nice-sounding name, it’s basically a potential economic sanctions bill against Hong Kong. It puts the power to sanction Hong Kong into the hands of the Secretary of State by giving him the option to revoke Hong Kong’s special trade status. Once this kind of thing is on the books it’s going to stay there. That means it will continue to be a thorn in the side of U.S.-China relations for the foreseeable future. Macau GGR has already declined by 8.5% in November according to Macau’s regulator, the DICJ. In an environment like this I can’t see Macau stocks continuing in an uptrend. At best we’re in a trading range. Truth be told, Macau has been locked in a trading range for over 10 years, so to be more specific I don’t see the sector breaking to new highs in the near future.

So if you’re looking for a more secure buying opportunity, go to the United Kingdom. Elections are next week and U.K. businesses are itching for a conservative majority. This will ensure that Brexit is finally voted through and companies can actually start making real plans for the future again. Wherever you my stand on the politics of it all, a landslide Tory victory will see U.K. stocks surge higher across the board. A hung parliament will see U.K. stocks fall. If Jeremy Corbyn somehow pulls off a miracle upset victory, the FTSE is going to crash. I don’t see that happening, but it should be mentioned just in case.

Which brings us to Rank Group, long one of my favorite gaming companies for long term investment. The stock is up 70% since August, but when you look at the top and bottom lines over the last year there’s no obvious reason why. Revenue is flat, operating profit is down, EPS is flat, revenues at Grosvener and Mecca are down, EBITDA is down. So what’s the deal?

First, Rank stock has been so terrible for so long, over 30 years now, that sentiment couldn’t get much worse. Second, it’s still one of the few gaming companies in the world, besides 888, that has little to no net debt and has remained fiscally conservative in the midst of an unprecedented liquidity binge drinking contest. This prudence has cost it growth and kept shareholders sleepy and bored, but it has also kept the company lean and agile and able to make moves and reinvent itself on its own watch.

And that is what it is doing through its Transformation Plan. The details of this much-touted company-wide efficiency exercise are unfortunately a bit shrouded, but it is certainly being featured prominently throughout its filings. There are supposedly 388 “initiatives” within this program that have saved £10.7m with another £9.3m projected next year.

With Rank there’s really one major transformation that could really change the company, and that is becoming a major online competitor. See the pie charts below taken from Rank’s latest investor presentation. This tells you all you need to know. 30-45% market share in 75% of the markets it concentrates on, and only 2% market share in online casinos. If Rank can raise that 2% number, it would be a totally different company. Long term Rank investors should watch this specific number closely. As important is micro-efficiency transformation plans are, Rank really needs a share of the online casino market to push through to the next level.

The main risks for Rank holders as I see them are a no-deal Brexit, and forced cuts in government spending, but even so Rank is still in a much better position than its U.K. competitors if either happens. The stock will fall, but not as hard as its peers. By the numbers, here’s the problem (second chart taken from the U.K. Office for National Statistics): 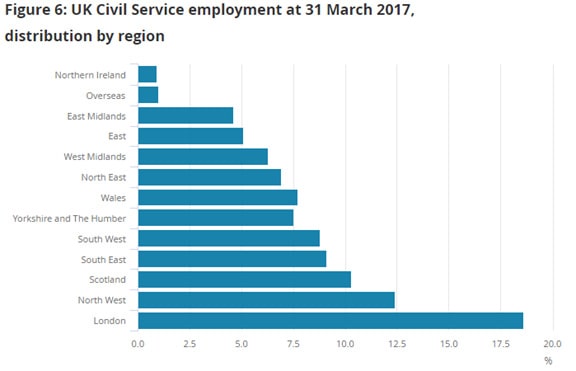 If you look at the first chart, you’ll see that 36% of Rank’s revenues come from London. London has the highest percentage of government workers in the U.K. by the second chart, for obvious reasons. Even outside of the government worker boon, Brexit by itself, even if by Johnson’s deal, is likely to hurt London real estate values , which could hurt Londoners’ willingness to spend money and gamble. This negative effect would only be temporary, and depending on how quickly Rank can move into online casino, could be counteracted to some degree.

One move that would really be interesting is a joint venture or partnership of some kind between 888 and Rank. I have no idea if such a thing is even being considered or thought of, but it would bring together two companies with rock solid finances that complement each other.

Overall, Rank remains a buy-the-dip stock with a good dividend, insulated against major risks and in the position to make acquisitions if things turn sour for the U.K. gaming industry. Keep it as a steady percentage of a gaming portfolio, rebalanced once or twice a year and holders should do fairly well over the next decade.