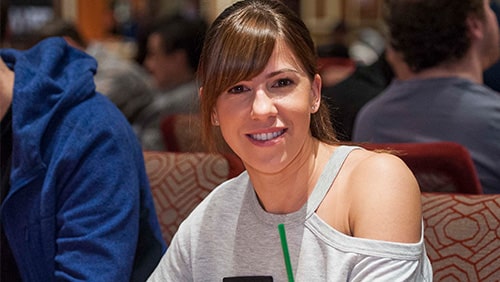 Kristen Bicknell became the first female poker player to win a Poker Masters event as she toppled Chance Kornuth heads-up to triumph in the $25,000-entry NLHE Event in Las Vegas.

Posting one of the biggest titles of her career to date, the partypoker pro took down a final table that at one point looked set up to become a procession for Chance Kornuth’s first event win of the Series. Kornuth, who had already finished second in two other Poker Masters events in the past week to take an early lead in the race for the Purple Jacket, was to be denied, however, and in the most spectacular style.

With six players making the final table, British high roller Ben Heath would be the first player to be eliminated, running his pocket kings into the pocket aces of Andras Nemeth. Nemeth was back in the game, but with Kornuth using his monster stack to deadly effect, the other players battled to survive rather than mount a serious assault on the chip mountain the 33-year-old player from Denver, Colorado had accumulated.

Kornuth’s power was such that he could move in freely on the field. However, when he did so with jack-seven, Kristen Bicknell called with ace-ten and held to catapult herself into the bracket of players able to take on Kornuth in a hand and worry little about those behind her in the pecking order.

Ralph Wong would bust in fifth when his suited ace-nine ran into Kornuth’s ace-jack and was unable to find help and Wong was shortly followed from the cardroom by Andras Nemeth. Nemeth was gone when Kornuth raised him all-in and Nemeth called with ace-three. Kornuth, however, held pocket fives and they held firm to cut the final table field in half.

The 2018 Purple Jacket winner, Ali Imsirovic, grabbed some priceless leaderboard points when he exited in third place, but it was not to be Kornuth’s day. The chip lead went to and for heads-up before Bicknell had the lead and was all-in with the covering stack holding pocket eights.

Kornuth was all-in and at risk, but happy to see that his pocket nines were ahead. However, a 4-5-7 flop saw the possibility of a gut-shot to win for Bicknell, and a six on the river gave her another tournament victory in a career that has already seen the partypoker pro and GPI Female Player of the Year win $4 million in tournament earnings.

The final table of Event #6 has changed the race for the Purple Jacket immensely, with Chance Kornuth’s third runner-up finish in six events giving him double the points of his nearest rivals. That said, with six of those rivals just another victory away from being right behind him, Kornuth cannot relax. While Kornuth is the biggest winner so far as you might expect, he’s now ‘only’ $148,400 ahead of Kristen Bicknell, after her signpost victory in the $25,000 NLHE Event #6 final.