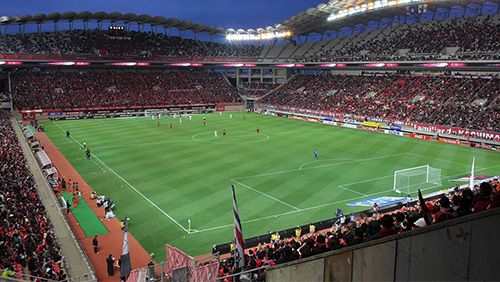 Liverpool and Manchester City are sure to duke it out to the death in the English Premier League. Barcelona and Real Madrid look set for a bitter battle in the race to be La Liga champions. In the German Bundesliga, Borussia Dortmund threaten to be as close to Bayern Munich as ever before. But could the closest title race not be in any of the top three leagues, but in the dormant Italian Serie A?

After a decade that has seen the Italian Serie A diminished in stature in terms of worldwide recognition following the 2006 ‘Calciopoli’ scandal around match-fixing that saw titles stripped from teams who were, in Juventus’ case, relegated and in others cases such as A.C. Milan, docked 30 points.

Serie A has benefited from the arrival of Cristiano Ronaldo, unquestionably, but another former Manchester United player is a key component of the hypnotic title race that is set before us this year.

Romelu Lukaku’s transfer to Inter Milan raised many eyebrows, not least in the Premier League, where the former Chelsea, Everton and West Brom striker had established himself as the number one striker at Manchester United prior to his departure. However, with the Norwegian former Old Trafford legend Solskjær openly preferring Rashford from period before he even took the job, things were always going to be difficult for the Belgian:

🗣 “I watched last year's game back at home. That's my TV and that's my daughter's shirt because she's a Rashford fan – how can you not be?”

When Solskjær took over the reins permanently, Lukaku took off – to Italy, and Inter Milan. With Antonio Conte desperate to get his man, it took £75 million but eventually, United took what they paid for the target man and the pieces were set for a Serie A battleground.

And what a battle it has been so far. In the only clash between the two sides who look like they will go toe-to-toe for the title, Juventus prevailed 2-1. But across the other games, Inter have had the advantage. After the latest sensational round of matches, the gap is a solitary point in Juventus’ favour courtesy of Cristiano Ronaldo’s right boot. Drawing 1-1 at home to Genoa on Wednesday night, Ronaldo had a goal ruled out by VAR in injury time. But in the 96th minute, the Portuguese magician hammered home a penalty to see his side leapfrog Inter into top spot. It’s going to be that close throughout the season.

The battle of the two teams isn’t just between two teams led by players with the Premier League in common, either. While Ronaldo and Lukaku both plied their trade in M13, Antonio Conte and Maurizio Sarri were both in the hot seat on the King’s Road, situated as Chelsea managers before Roman Abramovich decided that he wanted a young English manager in Frank Lampard.

‘Sarriball’ against the pragmatism and patience of Antonio Conte? Ronaldo’s knuckleball against Lukaku’s battering ram? Which weapon will fire the final shot in this season’s fight between Juventus and Inter Milan to become Serie A champions is sure to run right to the last battle, because make no mistake, this is a war which will rival any other league for two closely-matched platoons of soldiers willing to give everything under the banners of their respective leaders, both on and off the pitch.