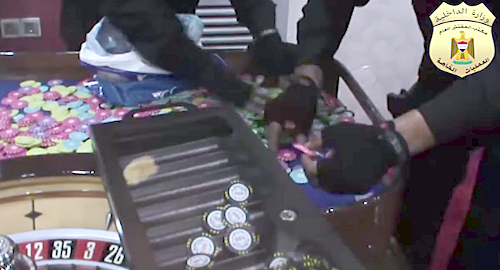 Iraq’s illegal gambling operators have learned the hard way that this month’s Shiite militia raids were no one-off.

This past weekend, Iraq’s Interior Ministry announced the results of a series of raids on gambling dens in Baghdad. Local media quoted a ministry spokesperson saying police had arrested 140 suspects from the Iraqi capital’s “gambling and roulette halls.” Two of these halls near two large hotels were shut down.

To buttress its claims, the Ministry released a vertigo-inducing video of the raids – apparently, the cameraman was more shaky than the gambling operators at whose faces the Kalashnikovs were pointed – complete with a seriously over the top dramatic score (seriously, don’t watch with the volume too loud).

The arrested suspects included 20 women ‘of foreign nationality’ as well as “members of various security services.” All of them face the possibility of up to one year in prison if convicted of running a gambling joint, while anyone accused of merely gambling in such a venue can do up to one month behind bars.

The police have failed to do much to disrupt gambling operations in Iraq, but were apparently prompted to act after a number of Shiite militias – who claimed to be operating “under the guidance” of Iraq’s Prime Minister Adil Abdul-Mahdi – raided a series of “mafias, roulette clubs, casinos, drug dealers and prostitution rings” operating out of high-end Baghdad hotels.

That operation resulted in the arrest of one Hamza al-Shammari, the reputed kingpin of “gambling, prostitution and drug trafficking sites” in Baghdad. Some critics suggested that al-Shammari’s operations were widely known, and that the raids were more likely to do with his unwillingness to share a sufficiently large cut of his ill-gotten gains with Iraq’s security services.

As an overwhelmingly majority-Muslim country, Iraq’s pejorative views on gambling tend to mimic the rest of the region. However, in the wake of the 2003 US invasion of the country, a Russian businessman called Vitaly Kouznetzov reportedly opened a casino in Sulaymaniyah, a city in Iraq’s Kurdish-controlled north, close to the border with Iran.

It’s unclear whether Kouznetzov still operates that casino, but Kurdish media reported last year that local police had charged 22 suspects with illegal gambling at a Sulaymani gaming venue. That raid was reportedly the opening salvo in a full-fledged crackdown of gaming operations in the region, which also targeted the venues for serving alcohol to their customers.