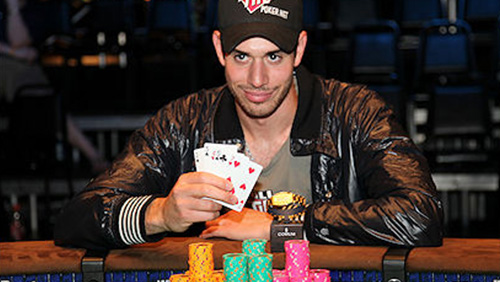 Nick Schulman stepped out of the commentary booth for a spot of R&R and returned with a second gold bracelet after winning Event #65: $10,000 Pot-Limit Omaha Hi-Lo 8 or Better Championship.

Nick Schulman is widely regarded as one of the best commentators in the poker world, and he’s also pretty good at playing the game.

Before the World Series of Poker (WSOP) opened their floodgates, Nick Schulman had won two bracelets, his last coming in 2012 after taking down the 101-entrant $10,000 No-Limit 2-7 Draw Lowball Championship for $294,321. In the ensuing seven years, he’s been fortunate enough to watch his peers play poker with their cards face-up, and he put all of that knowledge to use to win bracelet #3.

The bracelet reserved for the winner of Event #65: $10,000 Pot-Limit Omaha Hi-Lo 8 or Better Championship was dangling from the lips of Schulman after overcoming a field of 193-entrants.

By the time the final table came into view, the valet had filled up with cars belonging to five bracelet winners, holding ten between them. The most decorated finalist, was Brian Hastings, the four-time bracelet winner who retired from playing poker professionally to open up a tea business in 2016, and it was Hastings who presented the final hurdle for Schulman.

Schulman took an 8.5m v 3.1m chip leads into the heads-up phase of the competition after eliminating the former WSOP Main Event Champion, Joe Hachem, in the third position. Schulman extended that lead to 10.1m v 1.5m, but like Shadow Moon’s dead wife in ‘American Gods’, Hastings would not leave this earth.

Hastings doubled to a 4.4m v 7.2m deficit, and then soldiered on to take the chip lead for the first time since the two began to duel. Schulman stopped Hastings pulling away, doubling back almost immediately, and although Hastings would find the double-up when needed on another two occasions, Schulman kept pulling away until the final hand saw Schulman’s AcTc5c4h better As6s3h2h on an 8d8s7dQhJh runout.

The victory is Schulman’s 11th of his tournament career, and his second of 2019 after winning a 20-entrant $25,000 Mixed Game event during the U.S. Poker Open at the ARIA back in February.

Denis Strebkov once again fell short, finishing in fourth place, after a third in Event #51: $2,500 Mixed Omaha Hi-Lo 8 or Better, Seven Card Stud Hi-Lo 8 or Better for $89,744. Last year’s runner-up in this event, Michael McKenna, finished seventh, and the man who suffered the ‘worst bad beat in the history of poker’ recently (ironically commentated on by Schulman), Bryce Yockey finished eighth a few spits shy of finishing fourth in the $50,000 Poker Player’s Championship (PPC).

Three other stars who had cyclops like focus on this thing for the longest time were Connor Drinan (10th), Darryll Fish (13th) and Leif Force (14th).​