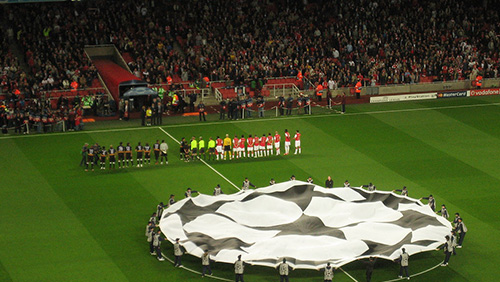 The UEFA Champions League may be making a cracking impression of a dormant volcano, but that doesn’t stop us talking about it—diversity index report from PlayTheGame, Neymar ban upheld and Sadio Mané chooses country over his club.

A nifty piece of work by PlayTheGame.org reveals that capitalism is killing the grassroots of football with the best in Europe continuing to eat caviar filled vol-au-vents with the rest settling for the black bits and pieces found at the bottom of a toaster.

The Diversity Index is PlayTheGame’s way of monitoring the divergent nature of admittance to UEFA’s Champions League (UCL), the most lucrative club competition this side of the flies hanging around the body keeping the door ajar a few metres from me.

Europe’s Big Five League’s all saw familiar faces leading the caravan of clubs trying to squeeze into the gates of the UCL this year, with Manchester City, Bayern Munich, Juventus, Barcelona and Paris Saint-Germain all retaining their titles, along with 23 other clubs across European leagues.

Eight new debutants grace this year’s UCL (five more than last year, but the mean over the past nine years). Data crunchers at PlayTheGame believe you’re likelier to see a working-class man wearing a tuxedo while sipping ginger tea in the local Non-Pol than any of the new blood dripping on stadia during the group stages.

The Diversity Index works by taking the number of appearances since the UCL began and dividing it by the number of clubs who have entered from each country. England is the third least diverse with only ten clubs competing over 90 appearances for an Index Rating of 9.00; Spain has a rating of 7.83, Italy 7.17, France 5.83 and Germany 5.79.

Juventus has won eight successive titles, Bayern Munich has won seven, and it’s not only the elite of the elite that is dominating. The minnow leagues have a similar problem with BATE Borisov (Belarus) winning 13 titles in a row, and PFC Ludogrest Razgrad (Bulgaria) and TNS (Wales) winning eight. In total, identical clubs from 24-countries will feature in the UCL this season.

So, if you want to choose the chicken dinner in the forthcoming UCL, the menu is light.

Paris Saint-Germain (PSG) is a commanding European club with little need to bribe UEFA officials for passage into their lucrative corridors having won six of the past seven Ligue 1 Championships, but they have not transferred domestic dominance into one of a European flavour.

PSG’s upcoming UCL campaign will have to begin without their record signing, Neymar, after the Brazilian lost his battle to overturn a three-match ban for ‘insulting match officials’ at the end of PSG’s defeat to Manchester United in the Round of 16 of the UCL earlier this year.

Neymar missed the match through injury but rendered the PSG hierarchy paralytic when he screamed into social media: “This is a disgrace, they put four people that know nothing about football in charge of looking at the replay for VAR. There is no penalty. How can it be a handball when it hits his back! Go f**k yourselves!”

The outburst came after the VAR-assisted referee awarded a last-minute penalty for handball against Presnel Kimpembe. Marcus Rashford stepped up to score, sending United through on away goals in a 3-1 Parc de Princes win after PSG had won the first leg at Old Trafford 2-0.

Neymar won the UCL in the 2014/15 season, scoring in the final as Barcelona beat Juventus 3-1 in the Olympiastadion, Berlin, but would the most expensive signing in the world swap his UCL medal for a Copa América medal?

You wouldn’t think so, and yet Sadio Mané declared that he would do something similar ahead of Africa’s equivalent to the Copa América, the African Cup of Nations.

Mané’s UCL medal still has the wrapper on it after Liverpool beat Spurs 2-0 in this year’s final in Madrid, and Mané told the French press that he would gladly give it up to win the Africa Nations Cup with Senegal.

Egypt is currently hosting The African Cup of Nations where Mané missed his country’s opening 2-0 win over Tanzania through suspension (he’s expected to return for Thursday’s game against Algeria).

“To win for my country, which has never won a Cup of Nations, would be magnificent. I am even ready to trade in my Champions League success to win the Africa Cup of Nations.” – Sadio Mané

It’s the third time that Mané has represented his country at the Africa Cup of Nations but has always come away with the inside of a bagel.

Cameroon is the reigning End Boss after beating Egypt 2-1 in the final of the 2017 event in Gabon.