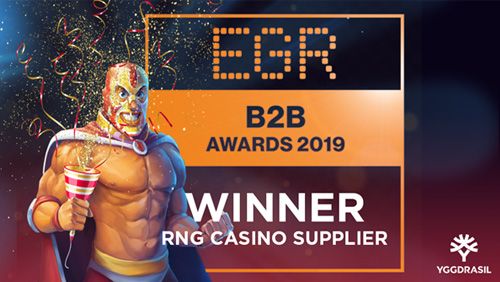 27th June, 2019 – Yggdrasil was crowned the RNG Casino Supplier of the year at the EGR B2B Awards 2019 on Tuesday night, cementing its position as a leading industry content provider.

The category recognises excellence in product development, innovation and user experience. Judges were impressed with Yggdrasil’s multiplayer table games, the launch of its first branded game Nitro Circus, and the introduction of the supplier’s game-changing YGS Masters programme.

This award follows previous Yggdrasil successes at the prestigious industry ceremony, this year held at the Tower of London. Yggdrasil won the Innovation in RNG Casino Software category in 2018 and was named Slot Provider of the year in 2016, and 2017.

“We’ve been part of the EGR B2B awards for many years now and it keeps getting better and better. Our sector is more competitive than ever but we’re proud to be part of such an innovative and progressive industry and delighted to have been selected by our peers as the best RNG Casino Supplier.

“Winning this award is a testament to all the hard work of the entire Yggdrasil team over the last year as we strive to constantly innovate and produce high-quality games with players in mind.”

For more information on this release, to arrange an interview, or to enquire about game imagery please contact Square in the Air on [email protected]

Yggdrasil is a provider of superior online gaming solutions for igaming operators. The business was founded in 2013 and has since emerged as one of the industry’s most respected and acclaimed suppliers. Yggdrasil operates a highly scalable business model and covers three product verticals: Casino Slots, Table Games and Bingo, in addition to the business verticals: YGS Masters, Yggdrasil White Label Studios and Yggdrasil Dragons. Since its inception, Yggdrasil has embarked on a solid growth trajectory enabled by a strong corporate culture focused on innovation, creativity, quality and technology leadership. Yggdrasil is headquartered in Sweden and has offices in Malta (operational HQ), Poland and Gibraltar.

For more information go to www.yggdrasilgaming.com