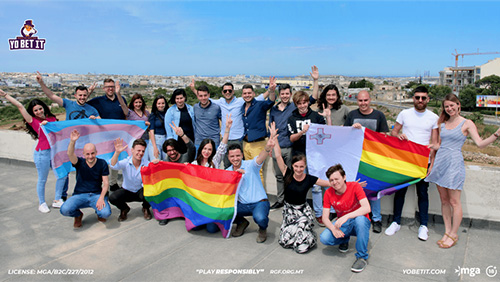 Yobetit has partnered with Allied Rainbow Communities in Malta to sponsor Malta Pride Week ‘From Riots to Rainbows’ in hopes of remembering the past and shaping the future. The Maltese iGaming company Yobetit continues to demonstrate its commitment to the LGBTQ+ community and is thrilled to be part of such an important event.

Malta is fast becoming one of the world’s friendliest LGBTQ+ destinations and continues to encourage equality. Malta even topped the European Rainbow Index as the best destination for LGBTQ+ and holidaymakers for the fourth year in a row. The sunny island has surpassed 48 other countries with just over 90% of the votes confirming that Malta respects human rights, and encourages full equality.

Malta Pride week will take place from 6th – 15th September, with the Pride March scheduled to happen on 14th September. The March will take place in Malta starting at The Granaries, Floriana, and ending in St.George’s Square, Valletta – where a concert will kick off until 11 pm CET. Everyone is welcome to join at any point during the day for the festivities and celebrations.

“We’re excited to have Yobetit be our Main Partners this year and have them support the LGBTQ+ community not just during Pride Week but throughout the year. Pride is a time where visibility and recognition is given to a minority and a time where we can express ourselves in great numbers without feeling judged. Companies like Yobetit enable us to grow this movement each year to reach out to more and more people who are at the fringes of society and to help us to give a voice to those who are underrepresented. We look forward to take this partnership in ways that is of mutual benefit to all involved.” Clayton Mercieca Malta Pride Coordinator

“We’re committed to doing everything we can to influence equality not only in the iGaming industry but in the community too. We are very excited about this partnership and look forward to what is to come.” CEO Nikolai Livori.

More information on Pride week can be found here.

Yobetit.com is licensed and regulated by the Malta Gaming Authority (MGA) under the following license: MGA/B2C/227/2012 issued on 1st August 2018. 18+ only. Gambling can be addictive. Play Responsibly. For more information visit www.gamblersanonymous.org/

Yobetit gives its players another reason to smile on a Friday
Press Releases
26 October 2018
.