Sweden and Norway in the focus with Gustaf Hoffstedt (BOS.nu) and Rolf Sims (Kindred Group) at MARE BALTICUM Gaming Summit 2019

Vilnius – 23 April 2019 – Gustaf Hoffstedt (General Secretary at the Swedish Trade Association for Online Gambling) and Rolf Sims (Public Affairs Manager for Kindred Group in Norway and Board Chairman of the newly formed Norwegian Trade Association for Online Gambling Companies) to share their views from all angles about the Swedish and Norwegian gambling industry at the second edition of MARE BALTICUM Gaming Summit, also known as the Baltic and Scandinavian Gaming Summit and Awards. 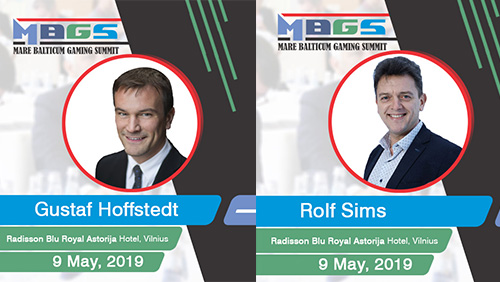 Sweden has been at the forefront of the gambling industry news for the past 6 months and has been often cited as a “newly liberalized online gambling market” .

Spelinspektionen has been handing out new licenses at a rate of more than one a week since the new year, with no signs of a slowdown any time soon.

Prior to the new laws, Sweden’s gambling market was essentially a state monopoly. Unlicensed gambling operators were accepting Swedish customers, but without going through the proper legal channels. In 2018, foreign gambling sites accounted for 29% of Sweden’s $2.5 billion gambling market, up from 24% the previous year.

Sweden’s new gambling laws were designed to give the state more control over the market. The fact that 73 companies have already jumped on board shows the new laws are having their intended effect.

However, it’s not all pink for the enthusiast operators, just two months ago, Sweden’s Minister on Public Administration, Ardalan Shekarabi said the government will be making more stringent regulations on gambling advertisements. He also summoned representatives of the gambling industry to parliament for a discussion on this topic.

At MARE BALTICUM Gaming Summit, Gustaf Hoffstedt (General Secretary at the Swedish Trade Association for Online Gambling) will take part in a special IMGL MASTERCLASS™ which is titled “It’s Hot in the Nordics: IMGL Mega-Panel”, giving you the opportunity to hear first-hand the updates from the Swedish gambling industry and the outcome of the harsh measures.

Gustaf Hoffstedt is the Secretary General of BOS, the Swedish Trade Association for Online Gambling since January 2015. Among the association’s members are all major operators and suppliers that operate with a license inside the European Union, but outside of Sweden. Prior to joining BOS, Gustaf served as a Member of the Swedish Parliament for the Moderate party, and as vice mayor and chairman of the Social board in his constituency Gotland before that.

Gustaf has fought for the abolition of the Swedish gambling monopoly and the implementation of a licensing system for more than a decade. He is pleased to see that things currently appear to be moving in the right direction.

Gustaf resides in Uppsala with his wife Caroline, who serves as vice mayor in the municipality for the Social Democratic party – the traditional rival of Gustaf’s own party. In their leisure time, they enjoy hiking in the mountains of northern Scandinavia.

When it comes to the Norwegian gambling industry, it is certainly a different situation.

This year, the online gambling operators in Norway have formed a new association to press the government to rethink its restrictive gambling policy.

The online gambling operators Betsson, ComeOn, GiG, and the Kindred Group announced the formation of the Norwegian Industry Association for Online Gambling (NBO).

The new association will urge Norway’s government to abandon its monopolistic stance in favor of a liberalized regime that would allow internationally licensed online gambling operators to apply for local licenses.

Carl Fredrik Stenstrøm, Rikstoto former commercial director and secretary-general at NBO, noted that he helped lead Rikstoto’s responsible gambling initiatives and his experience taught him that such efforts are not much use if they ignore the vast segment of the market over which the government has no control.

Stenstrøm said the regulatory regimes in Denmark and Sweden recognize that regulating “all the serious companies under one, responsible license model” is the proper way to go.

The Norwegian industry update will be part of the IMGL MASTERCLASS™ which is titled “It’s Hot in the Nordics: IMGL Mega-Panel”, giving you the opportunity to hear first-hand the of the Norwegian gambling industry and what changes are expected in the next period from Rolf Sims (Public Affairs Manager for Kindred Group in Norway and Board Chairman of the newly formed Norwegian Trade Association for Online Gambling Companies).

Rolf Sims graduated with a law degree from the University of Oslo in 1995, specializing in intellectual property and international human rights. He has previously worked on land concessions and area planning at the Ministry of Agriculture and legislation and individual cases related to oil pollution in the North Sea at the Norwegian Pollution Control Authority.

Between 1998 and 2018 he worked as a gaming regulator, first with the Ministry of Justice and Police, and from 2001 with the Ministry of Culture. The Ministry is responsible for the regulation of all gaming in Norway except gaming connected to equestrian activities. His scope of work encompassed EU/EEA-law, all aspects of legislation connected to gaming machines, I-gaming, bingo, provisions and regulations on lotteries and sportsbetting. He has also supervised the administration of Norsk Tipping, the Norwegian state-owned gaming company, as well as the Norwegian Gaming Authority. He was particularly involved in the Norwegian Slot machine case and Ladbrokes case which questioned the compatibility of Norwegian gaming law to EU/EEA-law. Rolf also participated as the Norwegian Government`s representative in the European Commission’s Expert Group on Gambling Services, which provides the Commission with advice and expertise in relation to the preparation of policy initiatives and facilitates the exchange of regulatory experience and good practices between EEA Member States. He was also a director on the board of the Gaming Regulators European Forum. In August 2018 Rolf took up a new position as public affairs manager for Kindred Group in Norway.

In January 2019 Rolf was elected board chairman of the newly formed Norwegian Trade Association for Online Gambling Companies.