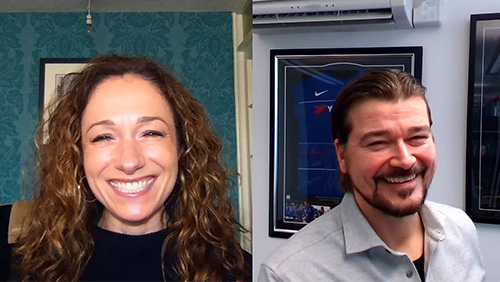 As our loyal readers must surely know by now, one of my greatest pleasures in life is observing an iGaming professional grow their business to new levels as the years go by.

When I first met Rasmus Sojmark, close to 15 years ago now, he was working for BetBrain as a Commercial Manager. In 2009 he founded Sports Betting Community or “SBC” and started organizing socials around London for sports betting industry professionals. Fast forward to today and the SBC brand now represents one of the top conference organizers in our industry and also serves as a popular sports betting news portal.

“SBC originally started out around 2009 and there were a lot of people that were quite supportive of the sport betting side, so SBC was a way of trying to keep that community together,” Sojmark shared with me.

In 2014, Sojmark hired Andrew McCarron to grow the media side of the business alongside four SBC socials a year. Shortly thereafter, Sojmark pinpointed a real opportunity to combine SBC’s news and content side with the events and networking side to create conferences catering to the sports betting industry specifically.

“So that meant that we created the first Betting on Football at Stamford Bridge, great setting, one of the top football clubs in the world, great stadium, so we had this one-day event and the focus was really on the conference content,” Sojmark said.

“There were great speakers, there were people actually feeling that they got something from this, I think there were 130 people there? That gave us that feeling that, the feedback from that event, that there was something we could build on,” he said.

“I think one of our key elements of success has been a continued support from good suppliers and sponsors within the industry that allowed us to keep innovating and investing into the space,” Sojmark added.

Following the success of Betting on Football, SBC decided to broaden their scope by adding another conference to their portfolio and launched Betting on Sports in 2016, a larger, two-day event taking place later in the year.

“And its now, this year, 2019, its on its 4th year! Its at Olympia London and we’re looking at around 140 exhibitors, 300+ speakers now. That two-day event has become now the main event and grown into this great yearly opportunity for the sports betting industry to come together which is a lot more than when we started out by creating an every quarter gathering of 100, 150 people. So that’s pretty great, its an amazing feeling,” Sojmark confirmed.

Anyone who has attended an SBC-organized event knows that in addition to enjoying top speakers and content, they will likely cross paths with a sports celeb or two, an extra special treat for delegates because most of them have a big passion for sports.

“So that brought in the element of excitement of having people like Franco Baresi, Ruud Gullit, now in the U.S. the event we have in New York and New Jersey, we have Morten Anderson which is the guy who played the most games in the NFL, he’s in the hall of fame,” Sojmark said.

“So working with these guys, me growing up personally as well, having a big passion for sports, these are the guys you idolize. Its kind of cool to have them also being a part of your event, to make the whole thing come together, of sports betting and sports and how it all works and making people feel that this is just the place to be when you want to deal with betting and sports and as well, of course,” he added.

The latest event added to the SBC roster is Betting on Sports America coming up in New York and New Jersey April 24th & 25th. This is the first event SBC will be organizing outside of London, a giant leap from their European comfort zone, but a natural leap forward for the SBC team.

“SBC is new to the U.S. We have not done an event in the U.S. before, so when PASPA was repealed in 2018 we looked at it and we thought, we’ve been doing sports betting events, the biggest ones, international ones, but out of London in the UK. That expertise complimented by having the biggest publishing house around the sports betting industry,” Sojmark explained.

“We had the experience that was necessary to educate, talk about, or at least address issues within the sports betting industry and what the U.S. can learn from mistakes made by other jurisdictions. Or how to regulate, now to not regulate,” he said.

“And all of them were very open, based on knowing how well we executed on the sports betting in Europe, that bringing the same type of experience to the U.S. would be a success and hence all the support we received and keep working with these guys has enabled us to spread the word around this event,” he said.

Building relationships and skilled networking are ingrained in Sojmark’s DNA and these attributes play a huge part in why he is so successful in what he does. As the leader of SBC, his team follows suit and they are consistently successful in providing the best networking opportunities for delegates, one of the “secrets to their success.”

“We’re taking time from out of their schedules for them to come here and then we have to deliver on that. Then in the evening, to give them that additional time to connect, we have three amazing venues where people will get dinner, drinks, well taken care of and just being part of it,” Sojmark explained.

“So this is the way we are networking and doing business is making sure that the ones you are selling to are getting the best experience. And I think we’re delivering on that in the U.S., its looking great,” he revealed.