Home / Press Releases / Taivo Põrk (Ministry of Finance, Estonia) will once again be a speaker at MARE BALTICUM Gaming Summit 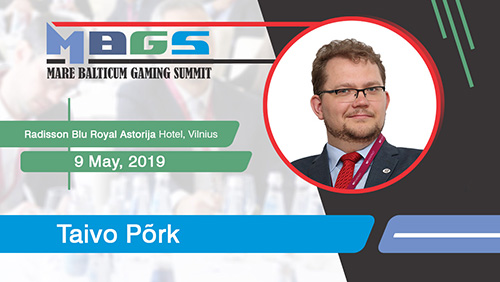 Vilnius – 28 March 2019 – In 2018, the MARE BALTICUM Gaming Summit was launched and had the aim to become a platform for learning and networking within the gambling industry stakeholders and government officials in the Baltic and Nordic region.

Right after the inaugural event has finalized in Riga last year, Taivo Põrk (Ministry of Finance, Estonia) has stated the following: “Looking forward to the next one! I will be back next year as well!“.

It seems that the promise is kept and the organizers, European Gaming Media and Events, are honored to announce that Taivo Põrk will join the “Focus on the Latvian and Estonian gambling industry” compliance panel discussion in 2019 during the second edition of the most important conference in the region.

MARE BALTICUM Gaming Summit will take place on the 9th of May at Radisson Blu Royal Astorija Hotel and gathers experts of the industry together with regulators to debate the recent actions and also brief the attending delegates about the regulations in Latvia, Lithuania, Estonia, Sweden, Denmark and the DACH region.

About the Gambling Industry in Estonia

Although the population of Estonia is not very large, gambling is one of the favorite pastimes of its citizens. According to a survey, no less than 80% of the country’s adult population have gambled at least once in their life.

In addition, the online casino industry is slowly gaining strength, as it has become legal in the beginning of 2010.

We must also mention the fact that Estonia has the most licenses issued in the Baltics when it comes to online gambling.

Taivo Põrk has been responsible for designing and executing national gambling policy in Estonia through legislation since 2011, as part of his duties in Ministry of Finance. He has also been a member in Expert Group on Gambling Services since its inception by the European Commission in 2012.

ESPORTS IS TAKING OVER, a mainstream topic at #MBGS2020VE
Press Releases
15 April 2020

Registrations are open for the 3rd edition of MARE BALTICUM Gaming Summit, save the date, 7 May 2020, Tallinn, Estonia
Press Releases
15 November 2019

Post-Event: The Baltic and Scandinavian Gaming Summit and Awards (MARE BALTICUM) sets a precedent in the region
Press Releases
27 May 2019
.