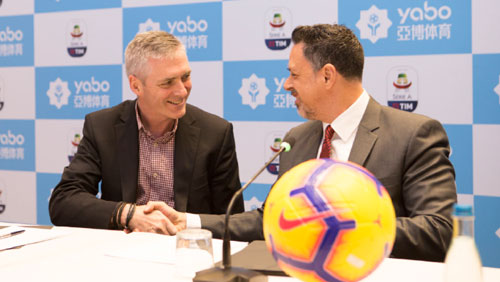 Yabo Sport have been named as the International Presenting Sponsor Asia for Italy’s Lega Serie A.

Their brand will be featured in match graphics, idents and virtual goalmat advertising in all live Serie A TIM matches broadcast throughout Asia.

Yabo Sport CEO Martin Novak said : ‘ We are a sports betting platform with global aspirations. Serie A has produced more great footballers than any other league. It is no exaggeration that
a relationship with Serie A means we are working with one of the very best’

The package is delivered by Interregional Sports Group (ISG) who are now in their fourth season of providing this tailored approach to sponsorship in Serie A TIM. ‘We are delighted to have entered into this agreement with such a prestigious brand as Yabo Sport and are looking forward to working closely with them for the rest of this season and beyond,’ said ISG’s Group CEO Chris Buckley. ‘Yabo Sport have a long track record of working with clubs and even national teams but this is their first league-wide deal and demonstrated just what a major force they have become,’ he added. ‘Delivering regional audiences to our brand partners through globally popular sports events is at the core of our business.’

Interregional Sports Group is an International Sports Media Group that has its HQ in London. The company is a full service agency focused upon global premium sports, with emphasis upon
regionalising broadcast technology and strategies. ISG provides its clients with the optimal audience engagement products. Working across all five top European football leagues, including UEFA,
on some of the best sports TV production in the world, to state-of-the-art virtual advertising technologies and traditional media; their philosophy is always globally impactful but regionally
relevant.