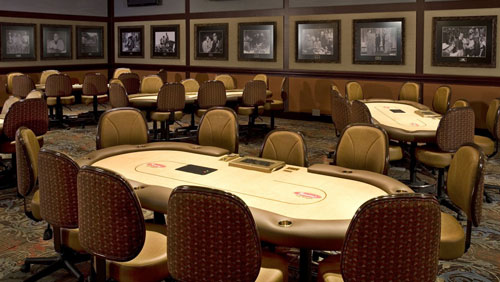 3: Barrels of a distinctly dour nature as a man is killed trying to rob the Bellagio Poker Room, the inquest ends into the death of poker player Emma Fryer, and an Icelandic poker player goes missing after last seen playing poker in Dublin, Ireland.

You can spend the evening laying diamond encrusted cement to welcome your new Tesla Model Y. If that doesn’t take your fancy, then you could make a piano pew and work on some funeral music. Or, you can walk into the Bellagio Casino’s Poker Room and rob it at gunpoint.

Whatever takes your fancy.

On Friday night, at 21:45, someone decided the gun route would take his fancy, and it didn’t end well.

An unidentified man approached the Bellagio Poker Room cash desk armed with a gun, demanded cash, and then tried to escape out of the North Casino entrance, attempting to steal a getaway car from a guest using the valet.

It was during the getaway that four police officers surrounded the robber who opened fire shooting one of the officers in his chest. The officers returned fire, striking a direct hit on the robber.

Emergency services rushed both the robber and the injured police officer to the hospital. A bulletproof vest saved the life of the policeman, but the robber wasn’t as fortunate, and he later died of his injuries.

Eli Elezra was playing in the poker room at the time of the shooting. There are worse people to be sitting with during a robbery. Ezra is a former member of the Israeli Defense Force’s Golani Brigade and fought in the 1982 Lebanon War.

Unreal ⁦@BellagioPoker⁩ cage got robbed again at gun point.15 minutes ago while we where playing our game scary Shit pic.twitter.com/qoZ3lHMOIS

It’s not the first time that someone has robbed the Bellagio Poker Room, and it won’t be the last.

In 2010, Anthony Carleo robbed the gaff of $1.5m in cash and chips before escaping on his motorbike. The fuzz caught up with him, and the beak sentenced him to nine years in prison.

In 2017, a man wearing a blonde wig and a mask robbed the joint in the middle of a Tuesday afternoon, while the Hollywood star James Woods was sitting in a cash game. Las Vegas police have never found the perpetrator.

The inquest into the death of Bet365 employee, and poker player, Emma Fryer, at the 2018 World Series of Poker Europe (WSOPE) in Rozvadov has ended, and a Satnav failure was a major contributory factor.

According to reports in The Mirror, Fryer, 42, had decided to leave her position at the UK bookies to take up poker professionally buoyed on by her third-place finish in a £1,100 buy-in £500,000 Guaranteed DTD100 in Dusk till Dawn (DTD), Nottingham where she netted £47,500.

Fryer travelled to the Czech Republic to compete in the WSOPE held in the tiny village of Rozvadov but was involved in a car crash as her, and fellow poker player David Nelson drove back to their accommodation in thick fog on November 5, 2017.

The inquest heard Nelson state that he only had 25 metres of visibility despite using headlights and foglights, but was well within the 125km speed limit. Nelson was using a Satnav system on his mobile phone and braked hard when he saw a sign for a roundabout at the last minute. The car spun 180 degrees before hitting a post sticking out of the ground.

Fryer died as a result of injuries to her brain. She also had rib fractures and damage to several organs. Nelson, who was in the hospital for three days, totally unaware of her death, has since been charged with a careless driving offence, although Fryers’ sister Liz Carter said, “there was no fault on the part of the driver. It was just a tragic accident.”

Fryer leaves behind her husband Gary Morris, and her two children Jessica (18) and Gemma (20).

An Icelandic poker player is still missing more than a month after competing in a poker tournament in Ireland.

Jón Jónsson was staying at the Bonnington Dublin Ireland where he was playing in the Dublin Poker Festival. Irish news reports state that the 41-year-old was last seen at around 11:00 on Saturday, February 9 near the Bonnington Hotel while his fiancé had coffee in the hotel bar.

Twelve members of Jónsson’s family travelled to Dublin from Iceland, and have vowed to remain on the Emerald Isle until they find him.

If anyone has any information that can lead to Jónsson’s whereabouts you should call the Ballymun Garda Station in Ireland on 016664400, or the Garda Confidential Line on 1800666111.

If you want to help support Jón’s family financially as they continue to search for him, then you can donate to his GoFundMe page.