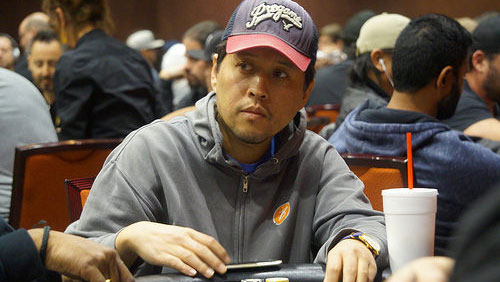 Sean Yu dominates the World Series of Poker Circuit at the Bicycle Casino in Los Angeles, cashing four times, and winning two gold rings including the Main Event, and media representatives that hope to descend on the 50th Anniversary special in Las Vegas can now apply for a permit.

There are men with calves that look like fire hydrants, Montenegrin passport controllers with hands like scooped out melons, and poker players who seem to climb the scaffolding of tournament after tournament navigating the wind and waves of chance with the skill and determination of Christopher Columbus.

I’ve never seen Sean Yu’s calves, nor the inside of his mitts – I have never seen him play poker, but results don’t lie. The man is a flame, and yesterday, once again, it burned so brightly, that everyone within his vicinity ran to the rail to hide from him.

Yu capped off an outstanding World Series of Poker Circuit (WSOPC) campaign at the Bicycle Casino in Los Angeles, CA, by winning the 678-entrant $1,700 Main Event adding a $210,585 to an already impressive roll-call of honour, and a seat into the Global Casino Championship he won two-years past.

Yu’s win is the 19th of a career that now boasts more than $2.14m in live tournament earnings.

This man knows how to fire a performance out of his cannon.

Three other stars of the game who went deep before succumbing to the avalanche caused by Yu’s presence at the tables were Mohsin Charania (15th), Joe Serock (20th), and Joe Kuether (22nd)

In other WSOP news, if you are a member of the media, and you intend to make your way to Las Vegas to turn green with envy during the 50th Annual shindig then it’s time to apply. The deadline for your application is May 10.