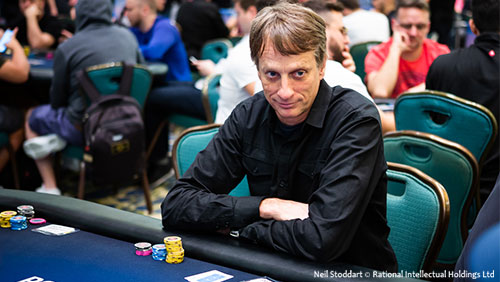 An interview with the God of the skateboarding world, Tony Hawk, on preparation, practice and how poker makes him feel.

A pipe is a pipe.

It moves water from one place to another; sometimes gas, which, you don’t want breaking in the middle of the birthday party birthday song, and I know people who also like to smoke them.

There is another secret hiding place in the world, similar to poker, where a pipe, half pipe, or quarter-pipe means something different, entirely.

And when you think of skateboarding, your second memory (let’s face it, your first memory is your first fall) is of Tony Hawk, the man who won the Skateboard World Championships for 12-consecutive years, brought skateboarding to the masses through his partnerships with video game console giants, and who did this.

Hawk was PokerStars’ guest at the PokerStars Caribbean Adventure (PCA) where he played in the $25,000 buy-in PokerStars Player’s No-Limit Championship (PSPC), and I was fortunate enough to interview the man who spins in the air like a bat catching a moth.

Only I missed him.

One minute he was there, and the next minute he leapt on that skateboard and not even Speedy Gonzalez was going to catch him.

Fortunately, he agreed to answer my questions via email.

The thought of my children flying through the air on a skateboard terrifies me. What advice would you give to parents of children who want to get involved in extreme sports?

“Take it slow and find lessons if you can. Skateboarding is only as dangerous as you make it.”

Can you talk about how you prepare mentally to be a world-class skateboarder?

“I tend to practice difficult tricks until they become mundane. Confidence is key.”

Skateboarding and poker are jobs/careers/vocations that buck societal norms – what advice would you give to people who want to follow their dreams, while at the same time feeling the need to conform to societal pressure?

“Do not rest on your previous accolades, and learn every aspect of your craft. You may find that your best talents lie elsewhere, but within the same community that you love.”

In which year of your life did you change the most; how and why?

“It wasn’t until my 40’s that I learned to appreciate what I have truly, and to be thankful for getting to do what I love for a living. Before that, I was constantly on the go and distracting myself with too many projects. This new perspective gave me a more meaningful purpose, and a better connection with my family.”

You are here as a guest of PokerStars, apart from this experience, what’s the coolest thing anyone has given you for free?

“My brother gave me his used skateboard – my first one – in 1978. It served to define who I am in nearly every sense.”

“Exhilarated, intimidated and accomplished all at once.”