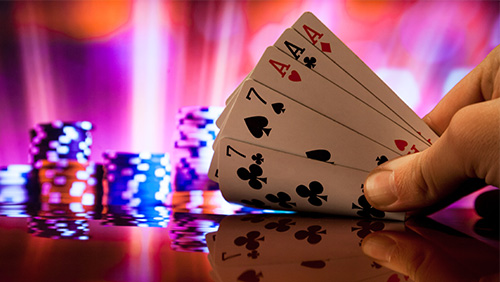 Video editor by day, poker aficionado by night. That sums up Nancy Matson’s life in a nutshell. Her poker skills have paid off, as she took down the WSOPC $1,125 NLHE event at The Bike this

past weekend to take home $42,940 and her first WSOPC gold ring. She now has earned over $129,000 in live poker action, according to Hendon Mob.

Matson only wanted to earn enough points to be in the top 100 of the poker women on the Global Poker Index, but was able to achieve something better. The LA resident emerged victorious from a field of 159 players to take down the event and add a little high-priced bling to her jewelry box.

The event lasted two days and the field helped create a prize pool of $159,000. The top 18 finalists all took home a little cash, with $2,130 being the least amount. 141 players were all given their walking papers on Day 1, leaving the final 18 to duke it out on Day 2. Of those, Matson was neither at the top or the bottom of the stack, but was able to hold her own to make it all the way through to the final table.

She described herself as the “dark horse” of the tournament – a relative unknown surrounded by a bunch of tournament regulars. This probably gave her an edge, as her anonymity meant that players weren’t used to her style and couldn’t get a proper read on her moves.

With the final table in place, Matson was somewhere in the middle of the pack in chips. As she bided her time and survived as others fell, she continued to grow her stack, waiting to pounce. She would finally face Todd Rebello, a WSOPC ring winner who earned his bling when he took down the $300 NLHE tournament at Caesars Atlantic City in 2008, to decide the tournament winner.

Rebello, who has over $720,000 in live-action earnings, was on a quest to pick up another WSOPC gold ring. Although he almost made it, he would have to settle for $26,530 for finishing in second place.