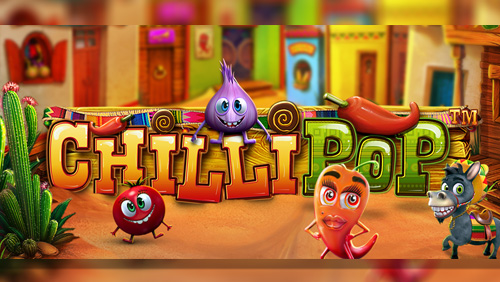 Season the cooking pot with all the spice, spirit, and sizzle of Mexican cuisine in ChilliPop, the carnival-themed, cascading slot game from Betsoft Gaming.

Set in an historic Mexican town, ChilliPop invites players to participate in a cook-off, with the entire community gathering to watch the best chefs put their own spin on the classic salsa. From the first spin, players will be immersed in timeless Mexican culture: a Mariachi strums his guitar in the shadow of a mission bell, cacti stud the streets, and classic ingredients like tomatoes, garlic, and onions join potent chilli pepper symbols to create tasty – and top-paying – cluster combinations.  Players will also be on the hunt for brightly-coloured piñatas; breaking open a single one will add a 1X multiplier, with further piñatas adding stacked multipliers to create maximum flavour from a single spin.

Played on a 5×3 grid at first, ChilliPop encourages players to get into the fiesta spirit with a secret ingredient: expanding rows and columns that can transform the playing space to a massive 8×8 grid.  Made possible by Betsoft’s proprietary ‘trail system,’ the expanding cooking pot is the centrepiece of ChilliPop’s Free Falls feature, triggered by players finding three or more smiling, sombrero-sporting mules.  From an allocation of between 5 and 26 free spins, the heat then steadily increases as every further mule found progresses the trail towards the next milestone, expanding the playing grid, and dramatically increasing the number of ways to win.

ChilliPop also allows players to buy into the Free Falls feature at any time, giving them the chance to add their own signature to this famous Mexican sauce – and to walk away with a seriously hot payout.

“Our goal with ChilliPop was to create a game with something for everyone, blending a lively, captivating theme with Betsoft’s trademark mechanical and audio-visual excellence,” says Annamaria Anastasi, Marketing Director for Betsoft.  “Like the in-game crowds that gather to watch a master chef at work, we know casino players have an appetite for high-quality games that do not sacrifice win potential for accessibility.  Everything about ChilliPop is designed to leave even the most seasoned slots player satisfied: from the tang of the combined cluster pays and stacked multipliers of the base game, to the transformative win potential of the expanding Free Falls feature, we are confident that all kinds of players will find Chillipop to their tastes.”

Like all recent Betsoft games, ChilliPop was built in the company’s cross-platform SHIFT development environment, which guarantees that the same great gameplay reaches players on whatever device they choose.

Betsoft Gaming develops innovative casino games for desktop and mobile.  Its portfolio of more than 190 RNG titles reaches players through partnerships with many of the iGaming industry’s leading operators.  Under the SLOTS3TM banner, Betsoft is elevating players’ expectations; these cinematic slots blend rapid, gratifying gameplay with an audio-visual excellence more typical of movies and videogames.

Betsoft has held a Class 4 license with the Malta Gaming Authority since 2014.  The company’s games and RNG are both independently certified in more than 15 different regulated markets, including Italy, Germany, and Romania.