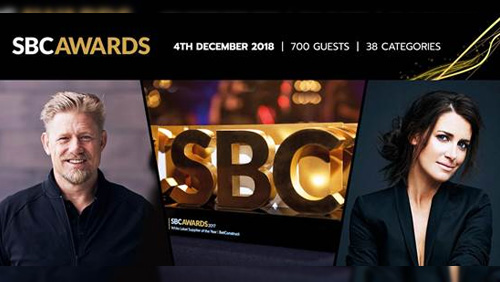 Having made her television debut in 1998, Gallacher has gone onto become one of the most recognisable faces in sports broadcasting, enjoying an illustrious 20 year career on Sky Sports. She was recently confirmed as Brand Ambassador of William Hill.

Gallacher will be joined on stage by Schmeichel, the legendary goalkeeper who enjoyed a trophy-laden eight year spell at Old Trafford, and helped his native Denmark to unexpected success at the 1992 European Championships in Sweden.

The ‘Great Dane’ lifted the Premier League in five of his eight seasons with Manchester United, as well as three FA Cup’s and a League Cup, before captaining the side to Champions League glory as the final part of the club’s infamous 1999 treble winning season.

Schmeichel will be available for meet and greets throughout the evening, while there will be a Q&A on stage before the start of the awards, in which Gallacher will be asking the questions for Schmeichel to answer about his career.

Schmeichel said: “It is a pleasure to be associated with the SBC Awards, an increasingly important indicator of the highest performing companies in sports betting – a sector that continues to play a significant role in the world of sports, and particularly football.”

Gallacher added: “Having witnessed first-hand the excitement around SBC organised events, I can’t wait for the SBC Awards 2018. Given my long association with football, it is particularly exciting for me to share the stage with a true footballing legend.”

This year’s Christmas-themed ceremony has been expanded to recognise excellence across 38 categories, which includes 12 Operator/Affiliate awards and 20 Supplier Awards, alongside five new Casino Beats Awards and the inaugural Leader of the Year Award.

Rasmus Sojmark, CEO & Founder of SBC commented: “We are very proud to have two such outstanding sports personalities hosting this year’s SBC Awards. Peter Schmeichel and Kirsty Gallacher will play a big part in delivering an unforgettable awards evening to close off a successful year in style.”

To see the shortlisted companies for each of the awards, click HERE, or visit www.sbcawards.com.

All attendees will also be treated to a champagne and cocktail reception, an exclusive three-course seated dinner and unlimited wine, beer, spirits and mixers on the table, and evening entertainment, including one of London’s top DJs.

● For those wishing to enquire about sponsorship opportunities at the event, please also contact our sales team using the same email address or phone number.

SBC (Sports Betting Community), founded by Rasmus Sojmark and Andrew McCarron in 2009, has established itself as the ultimate hub within the gaming industry, providing a full range of services, including news coverage, media services, exhibitions, conferences, awards and charity events. SBC work closely with industry leaders to develop and engage the betting and gaming industry. Main of SBC include SBC News, SBC Events, SBC Media, CasinoBeats and SBC Americas. Together with its affiliated companies, SBC has 45+ employees, with headquarters in London, and offices in Manchester, Kiev (Ukraine) and Poznan (Poland).