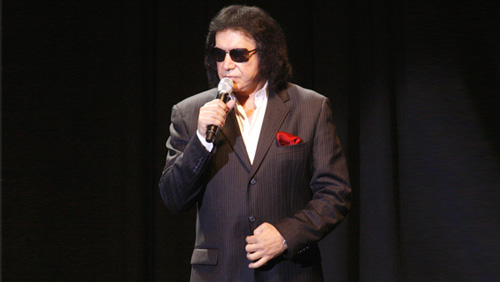 In 1981, rock group KISS sang, “A world without heroes Is like a world without sun. You can’t look up to anyone without heroes” in their hit song “A World Without Heroes.” He may not have known it at the time, but KISS frontman and guitarist Gene Simmons would ultimately be considered a hero. He is now going to be honored as such at the Fourth Annual Los Angeles Police Memorial Foundation’s (LAPMF) Heroes for Heroes Celebrity Poker Tournament and Casino Party next month.

According to a Los Angeles Police Department (LAPD) press release, the event will take place on November 10 at the Avalon Hollywood in California. The event will feature celebrities from film, TV, music and sports industries with Simmons at center stage. The event is designed to raise funds for the families of LAPD officers who have either died or been injured in the line of duty.

Simmons was singled out for his contributions following the terrorist attack on September 11, 2001. Last month, on the anniversary of the tragedy, the rocker was an ambassador at the Cantor Fitzgerald & BGC Partners’ annual Charity Days event, which was organized to commemorate 658 individuals of the Eurobroker firm, who lost their lives in the attack. He appeared along with former UK Prime Minister Tony Blair and former U.S. President Bill Clinton and led activity that helped to generate “billions of dollars” for charity, including the LAPMF.

Explained Simmons at the event, “I have great respect for our law enforcement, armed forces and first responders. They do jobs the rest of us would never do and when they’re in need, it’s the least I can do.”

The event is going to be one-of-a-kind. There will be a celebrity poker tournament, casino games, hand-crafted cocktails and cuisines and life music. There will also be a number of raffles and live and silent auctions.

Up for grabs at the auctions will prizes such as a seat for the 2019 PokerStars Caribbean Adventure Main Event, a poker training session with Daniel Negreanu, dinner with baseball great Tommy Lasorda and a Gene Simmons VAULT collection set. In addition, the LAPD is putting up a couple of awesome prizes, as well. Bidders can fight it out for a trip on an LAPD helicopter, a training day with the city’s SWAT team or training at the Emergency Vehicle Operation Center—perfect for learning how to maneuver through the chaos of LA freeway traffic.