Get in the groove with Realistic Games’ Shuffle Bots 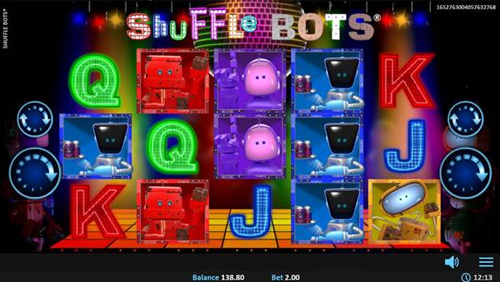 Full of colourful dancing robots, the game is packed with exciting new features including the Cocktail Bot who can appear randomly on any spin turning a number of symbols wild.

Watch out for the unique shuffling reels feature in the bonus round where the player can also receive a random chance of triggering the feature again and again!

This 5-reel, 20-win line slot incorporates the latest in HTML5 technology, meaning players can experience the best of the action in full screen on desktop, phone, and tablet.

Robert Lee, Commercial Director of Realistic Games, said: “We are thrilled to be unveiling Shuffle Bots® as the latest addition to our portfolio.

“The game has been developed using our new Games Machine technology which allows us to create exciting new features that can be used in future concepts.

“Shuffle Bots® offers the player a wide range of engaging features both in the base game and during the feature round, and the chance of randomly activating the feature again and again is sure to be a dancefloor hit with them.”

Shuffle Bots®, which can be viewed here, is the latest release from Realistic Games, who recently launched its cutting-edge Realistic Roulette, a 3D take on the popular table game that offers a new level of player immersion.

Based in Reading, Berkshire, Realistic Games is a leading supplier of high-quality, electronic gaming content to some of the world’s most successful operators. Our technologists, designers and modellers have many years of experience in both the land-based and digital gaming markets. We are passionate about the products we create. The team specialise in creating roulette, blackjack, slots, and fixed odds games tailored to a wide variety of devices, including PCs, iPhones, iPads, Android phones and tablets. The games are fully-hosted on our ReGaL games platform and are accessible to customers through a simple integration. ReGaL first went into production for Stan James in April 2011. Subsequent launches followed with BetVictor, Ladbrokes, bet365, Boylesports, Paddy Power, William Hill, Coral, Gala Bingo, Bede Gaming, Gaming Realms, Daub, Betfair, NYX, Rank, Optima, FSB, Leo Vegas, Vera and John, Betsson, GVC, and The Kindred Group.