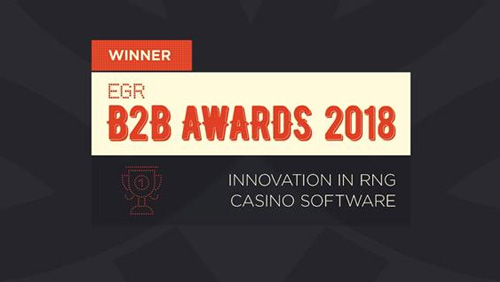 21st June, 2018 – Yggdrasil Gaming reaffirmed its position as the industry’s most innovative provider with a yet another title at the EGR B2B Awards, picking up the Innovation in RNG Casino Software award.

The category recognises excellence in innovation, user experience and product differentiation, and was awarded for Yggdrasil’s pioneering work on its new table games product, powered by its proprietary REDUX™ engine.

The award follows previous Yggdrasil successes at the prestigious industry ceremony and cements its place as the go-to supplier for world-class innovative content.

Yggdrasil was named slot provider of the year at the prestigious industry event in 2016, and 2017, and rising star in 2015.

The company has recently strengthened across product verticals, with high profile launches of new bingo and table games offerings, while also expanding its global footprint into Spain, Italy and beyond.

Yggdrasil Gaming CEO Fredrik Elmqvist said: “As Yggdrasil continues to grow, we remain completely focused on delivering creativity and innovation to all of our partners.

“Our recent table games and bingo launches, coupled with programmes such as our semi-open platform YGS Masters, show we never stand still.

“I am immensely proud that the hard work of every single Yggdrasilian is once again being recognised.”

Yggdrasil’s slots are renowned for their outstanding graphics and gameplay and many have become global hits. They are integrated via the industry-changing iSENSE 2.0 HTML client framework which allows for simultaneous launches on desktop and mobile, and is supported by BOOST®, a collection of promotional tools focused on engagement and retention via concepts such as Missions, Super Free Spins™ and Cash Race, and BRAG, an industry-first concept which allows for the promotion of games via social channels.