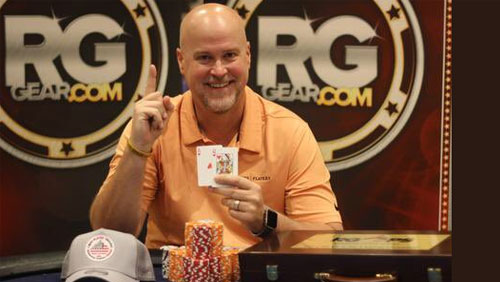 Seven fun-filled nights cruising around the Caribbean, stopping at exotic ports-of-call and enjoying the salty air. Throw in a little poker, and you have the inaugural RunGood Poker Series

Global Championship. The three-day tournament took place on Royal Caribbean’s Liberty of the Seas cruise ship and saw 159 players vie for a chance at the top prize. In the end, the victory was handed to Oklahoma’s Shawn Sparks following several long hours of final table action that saw two complete levels before the first elimination was found.

Trying to whittle down the field, Lauren Bunch doubled twice at the final table. Cash Carpenter doubled his stack once, but wasn’t able to keep the momentum going and was sent to the rail in seventh place. His pocket tens were no match for the pocket aces held by John Heckenkamp, and he was relegated to the deck chairs with $3,608. Soon after, Sparks picked up a massive pot when he took out two opponents, Eric Bunch and Shane Fuller in one hand. The trio were in all in when Sparks squeezed out a Queen on the river to send his opponents packing. At this point, Sparks held a comfortable lead among the remaining four players.

Bunch’s two double-ups helped her get this far, but she wouldn’t advance any further. She was eliminated in fourth place, leaving only Bunch, Tim Krisher and Heckenkamp at the felt. All three were almost even in chips and they decided to chop the pot. With a slight chip lead, Sparks was given first place and $21,417. As the tying runner-ups, Heckenkamp and Krisher each pocketed $20,416.

Sparks has now made it to the money in two tournaments this year. Prior to the RunGood victory, he placed first in a $365 NLHE ring event at the March WSOP Circuit in Tulsa, taking home $13,284 and a WSOP circuit ring. Sparks also picked up 160.53 points for the Player of the Year race from his RunGood win, but still has a long way to go to be a contender. He only has a total of 248 points and is ranked 22,111 in the race.