Home / Poker / Phil Galfond and the impending battle with Thanos 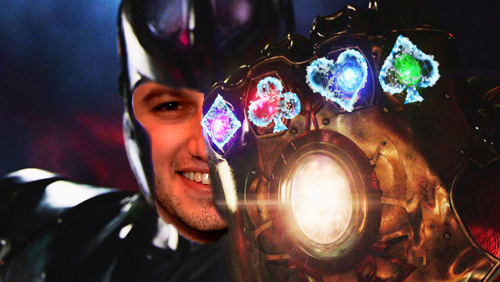 Phil Galfond has released his second update on RunItOnce Poker, and there will be no Heads Up Displays allowed, prompting Lee Davy to question how the man will continue to live up to the star like expectations of his tribe?


When I considered trying to be a professional poker player (and I knew very little about poker) I had enough business savvy to Google the best online poker player and coach in the world.

One name kept coming up.

In my time with the online training site, I learned plenty from the great man and the brilliant coaches who supported him. My abiding takeaway has nothing to do with three-betting ranges or pre and post flop strategies. It was Galfond’s rise in popularity within the poker community. He is the Iron Man of poker.

And so, when PokerStars turned purple and began treating the galaxy with the same disdain as Thanos, who did the poker community hope could save the world – Phil Galfond.

But as anyone who has seen the Avengers Infinity Wars knows, Iron Man ends up in the middle of nowhere, surrounded by dust, after trying everything in his power to make a difference, but ultimately ending up a loser.

When I Was a Lad.

I never made it as a pro.

The closest I came was after hiring the BlueFirePoker coach, Alan Jackson, as a tutor. Jackson was one of the top talents at interrogating Heads Up Display (HUD) data and using it to turn losers into winners.

Working with Jackson in this way made complete sense to me.

I wanted to be professional, and there isn’t a sport in the world that isn’t using articulate algorithms to help exploit or cement weaknesses and to utilise strengths better.

It didn’t take long to become a winning player, but take my HUD away from me, and I was like one of those kids who hang around at the end of your shopping line waiting to bag your groceries but doesn’t have a bag.

With the HUD I was a pro.

Without it I was a recreational player.

An Update And a Plan

Phil Galfond first put on his Iron Man suit after declaring his intention to expand upon the RunItOnce (RIO) brand and build an online poker site. Coming when it did (almost universal disappointment at PokerStars from the pro community), you had to tip your hat towards Galfond for being one of the only people to back up his criticisms by trying to do something about them. The hat tip, however, was not only courteous praise. It was a fond farewell. Iron Man was about to become dust.

You can’t operate an online poker room and remain a hero.

I just can’t see it.

Like Dr Strange, I have closed my eyes and searched the future for an ending where Phil Galfond wins, and it doesn’t materialise.

I hope he proves me wrong.

Last month, on the RIO blog, Galfond gave us an update.

The RIO poker room would arrive in two phases. The first coming in the summer would be a cash game offering. More details would follow, and they have, in a blog post titled: #2 Laying The Groundwork.

There will be no HUDs allowed on RIO.

I’ve read this comes as a surprise, but not for me.

“A poker site needs to believe in the dream of poker as a career. It shouldn’t cater to professionals over the other players, but it must make every policy change with the viability of the dream in mind.” – Phil Galfond.

I can see how Galfond’s quote could lead a professional to believe that HUDs would be allowed on RIO, but not when balanced with this:

“A poker site should believe in fairness…It shouldn’t let honest players, professionals or recreational, be taken advantage of by others exploiting unenforceable rules. It should seek to put a stop to predatory behaviour and to cheating of any kind. It should strive to create as level as playing field as possible.” Phil Galfond.

The fundamental question was never should RIO allow HUDs, but what could they do to mitigate proliferation on the site (through nefarious practices). Laying the Groundwork explains how Galfond and the team propose to render the use of HUDs as useful as giving a woman Viagra.

And the idea is snazzy.

RIO will use anonymity to make it difficult for third-party software creators to create a HUD worth using on RIO. You won’t have a screen name. Instead, RIO will give you a new one each time you sit down, by randomly generating a first name and the initial of a surname.

It gives the game a less robotic feel.

And that’s not the only change that makes your online poker playing experience more human.

Galfond talks about tackling the HUD problem in three ways:

As transparent as Galfond wants RIO to be, the team will keep their powder dry on the first two for security purposes. Rest assured, RIO will be keen to prevent third-party software from ruining the integrity of your experience, and they believe the proposed changes outlined above reduce a HUDs effectiveness by as much as 90%.

The Many Worlds Theory

So far so good, so why do I believe Galfond will end up marooned on Titan clutching at his wonky heart?

“When we started researching and debating our policies, it became clear quite quickly that no matter what we decided, many of you would be disappointed,” wrote Phil Galfond before continuing, “There are no right answers.”


Galfond spoke admirable and fondly of HUD use. As one of the world’s top coaches, he understands the power of data. He enjoys using them, and who knows, when they roll out their nosebleed options perhaps pros taking on pros at the highest level will include third-party software?

Galfond’s problem is Thanos, and PokerStars is not playing the role of the Deviant in this part of the story.

In the excellent book, Who Do You Want Your Customers to Become? The author Michael Schrager believes the future of any company depends on the future of the customers that find value in that company.

If Galfond is to succeed, then he needs to use innovation to design the type of customer he foresees calling RIO home. The vision of the customer becomes more important than that of the company.

Who does RIO want their customers to become?

It’s clear that Galfond wants his customers to have the ability to become a professional poker player, but I think, the overarching goal of the company will be for the customers to be happy

But this is a complicated beast to manage.

You find a fish on the riverbank starving of oxygen. You pick it up, brush off the dirt, and sling it into the river, only for piranhas to turn it into bone within seconds.

There is conflict burning inside the man, I can feel it in the pages of this blog post. Galfond must fell so much pressure to save the world, with the knowledge there is no right way to do so.

Each complaint will be another dagger in his heart.

Each criticism another bullet.

The man takes his time to explicitly state the context that acts as the fertile earth from which his ideas emerge, and people comment without even reading the blog post.

Phil Galfond is a great poker player, often cited as being a future leader of this strange little tribe that exists beyond the confines of our coffee shops, office cubicles and supermarkets.

He is also a great man.

But he is no superman.