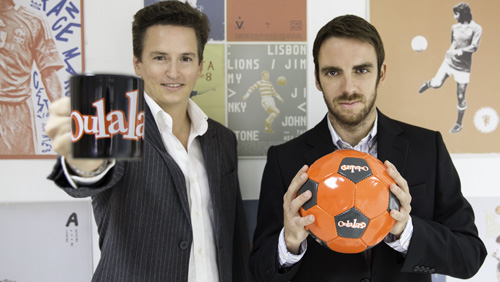 London – 21st February 2018 – Valery Bollier and Benjamin Carlotti, co-founders of Daily Fantasy Sports (DFS) operator and B2B provider Oulala, have been nominated for the ”Compliance Outstanding Achievement Award” for initiating the process of adequate regulation of the DFS sector in Malta.

The year 2017 was a milestone for the development of fantasy sports in Europe as the long-awaited licensing framework that regulates skill-based games, fantasy sports included, came into force. This was the culmination of a process that actually began five years ago.

”We feel honoured to be among the candidates for a prestigious award which recognises our efforts to have the proper regulation of DFS,” commented Carlotti, the firm’s Managing Director. ”When our game was launched in 2013, there was no skill-game regulation in place in European countries. By default, the game was considered a sports betting activity. It was therefore essential that we aimed for a legal frame from the gaming authorities that was tailored to our specific function. We discussed our sector’s needs with European legislators and, as expected, Malta was the first country to welcome our suggestions.”

The first discussion between the co-founders of the multi-award winning company and the Malta Gaming Authority (MGA) took place in January 2014. Malta’s intent to regulate digital skill games involving prizes was first announced in December of the same year when the MGA published a consultation document. From then onwards, Maltese regulators sought the input of various industry stakeholders and experts in order to develop a framework which facilitates the development of the sector.

The MGA spokesperson said: ”Oulala actively offered their feedback to the MGA’s public consultation on the regulation of skill games back in 2015. Together with the feedback from other stakeholders, the information received during the consultation period allowed the MGA to propose a regulatory framework that addresses consumers’ risks, and prevents money laundering and criminal infiltration, whilst keeping in mind the exigencies of the industry.”

There is no doubt that Malta has become the epicentre of DFS in Europe. So far a total of 16 B2B and B2C licences have been granted to operators on the island, while in 2017 Malta also got its first event, the European Fantasy Sports Summit (EFSS), dedicated to DFS. The second edition of the summit, organized by the GamingMalta Foundation and Summit of iGaming Malta (SiGMA), and supported by Oulala, will take place in November this year.

The GamblingCompliance Global Regulatory Awards recognise excellence in the field of regulatory compliance and responsible gambling. The award ceremony will be held on the 18th of April in London.

OulalaGames Limited – is a B2B-licensed fantasy sports provider, the company behind an award-winning daily fantasy football management game launched in August 2013. Its highly innovative and advanced scoring system in fantasy football uses 70 different statistical criteria, which are then converted into fantasy points in real time accordingly. A monetised version of the site, launched at the end of 2015, is now used as a case study to present the efficiency of the game to future B2B partners. The latter may opt for a fully customised solution with API, Iframe and Turnkey delivery.

‘If the US market opens, the video gaming industry is in the perfect position to emerge as the sole winner
Press Releases
23 January 2018