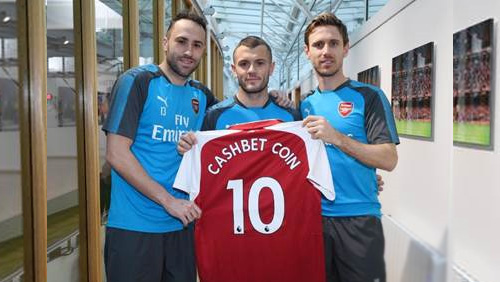 The first-of-its-kind deal, which makes CashBet Coin the club’s exclusive and official Blockchain Partner, sees Arsenal become the first major team in world football to officially partner with a cryptocurrency.

The agreement will give the CashBet Coin brand prominent placement via in-stadium advertising channels for Arsenal home Premier League games at Emirates Stadium.

Vinai Venkatesham, Arsenal’s Chief Commercial Officer, said: “We are pleased to welcome CashBet Coin as our partner. We are looking forward to working with CashBet Coin as they launch their new cryptocurrency.”

Dr. Mike Reaves, CEO and Founder of CashBet, said: “With our ICO for CashBet Coin, we are actively targeting a global, multi-billion dollar marketplace of iGaming content providers, operators and players.

“We are delighted to do so in partnership with one of world football’s true giants in Arsenal, enabling us to build our brand and engage this audience in a meaningful way.

Founded in 2012, and based in California, CashBet a leading cryptocurrency-enabled, mobile-first iGaming platform provider. Its cryptocurrency, CashBet Coin, enables an improved player experience through improved trust, speed and cost. CashBet leaders are veterans of the regulated, online gambling industry with many years of successful operation. CashBet is licensed by the Alderney Gambling Control Commission and the UK Gambling Commission. For more information, please visit the official ICO website at http://coin.cashbet.com and the company website at www.cashbet.com. To join in on the ICO conversation on Telegram, go to https://t.me/cashbetcoin.

Arsenal is one of the leading clubs in world football with a strong heritage of success, progressive thinking and financial stability.

The club was founded in 1886 in Woolwich, south London, before moving to Highbury in north London in 1913. We moved to Emirates Stadium in 2006.

In addition, Arsenal Women are the most successful English club in women’s football. They celebrate their 30th season this year. The club has 45,000 season ticket holders, 1.8m digital global members and one of the biggest digital followings in the game with a reach of 85m across all channels.

The Arsenal Foundation uses the power of football and the Arsenal name to inspire and support young people in north London and across the globe. The Arsenal Foundation raises funds each year and works with a number of key partners including Save The Children, Islington Giving, Willow and the Gunners’ Fund. Locally, Arsenal in the Community has delivered programmes to drive positive social outcomes for more than 30 years.