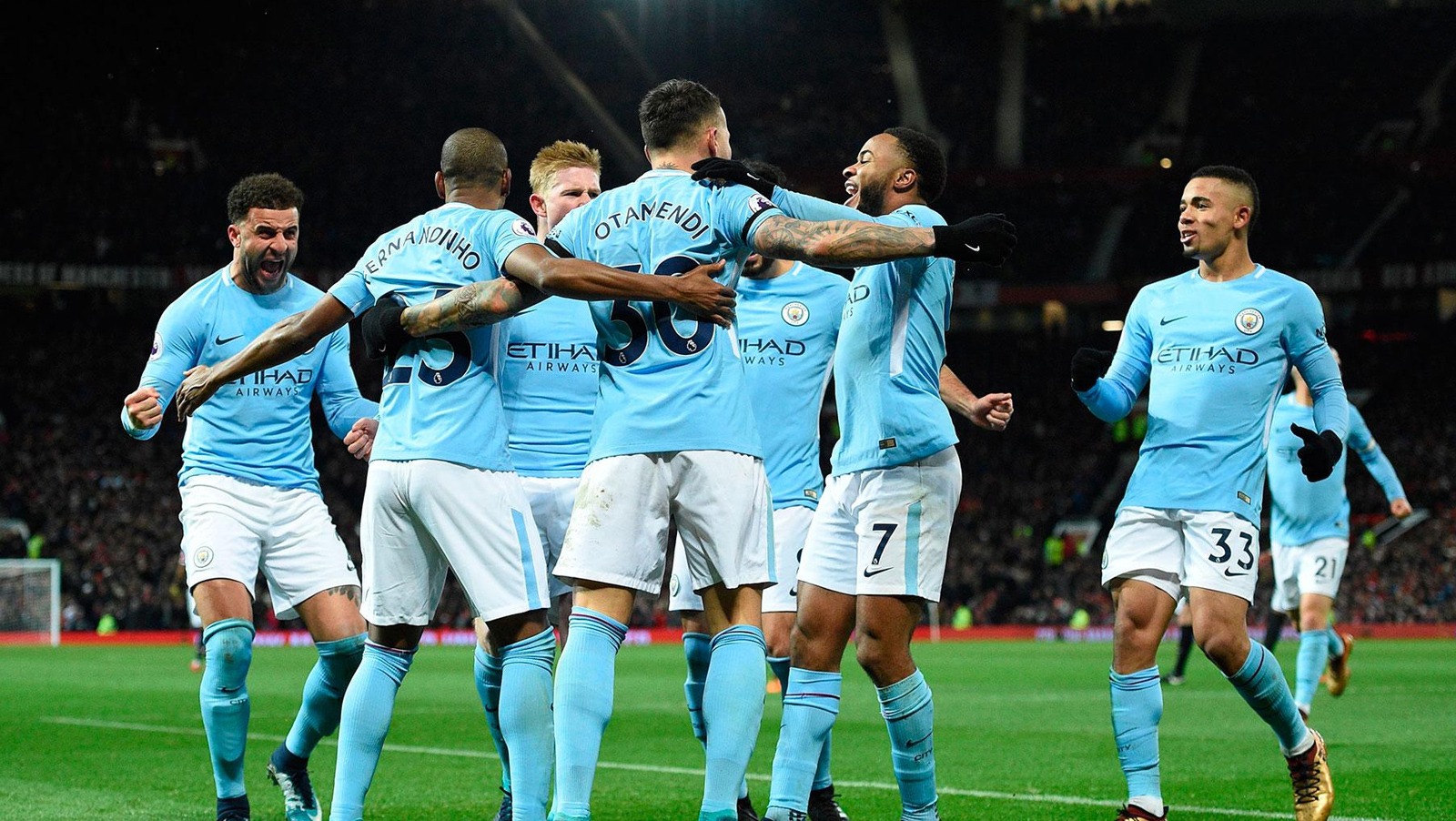 The Premier League title race is over. With teams getting zapped at The Etihad like hypnotised flies heading into the great blue fly zapping yonder, Man Utd had to beat their rivals when they came to Old Trafford to entertain any possibility of catching up with the enemy.

United hadn’t lost at Old Trafford in 40-games, a run that reminded the fans of the good old days when Sir Alex’s sides were so utterly dominant. If city’s unbeaten run was going to end anywhere, this is where it was going to end.

But City’s run didn’t end. Instead, they set a new record for successive top flight league victories after recording their 14th win with a dominant 2-1 victory.

City controlled the game with United only seeing 35% possession, their lowest at home since Opta started recording such dainty statistics back in the early noughties.

The Blue half of Manchester took the lead in the 43rd minute, when Man of the Match, David Silva, was on hand to clear up a mess in the United penalty area after a corner from the right. It was a well-deserved lead. But United went into the half time interval on an even keel after a mistake from Fabian Delph allowed Marcus Rashford in on goal, and the teenager fired a low drive into the back of the net.

Pep Guardiola has an exceptional head-to-head record against Jose Mourinho, winning eight matches against the Special One, more than any other manager, and he made it nine after Nicolas Otamendi scored from six yards, after a Romelu Lukaku clearance rebounded in front of the Argentine defender.

Despite City’s dominance, United could easily have pinched a point, when Romelu Lukaku had the opportunity to salvage a poor personal performance with a strike from inside the six-yard box, only to see Ederson save not once, but twice, when Juan Mata tried to squeeze in the rebound.

After the match, Mourinho slipped into his ‘poor loser’ mode in a way that only Arsene Wenger can match, claiming that Michael Oliver failed to award a spot-kick when Otamendi clashed with Ander Herrera. The replay shows that the midfielder dived.

When asked if City would go on and win the league, Mourinho, replied that City is:

“Protected by the luck, and the gods of football.”

City lead by 11-points, meaning the side that’s beating everyone needs to lose four times while the rest keep on winning hence the 1/25 odds that some bookmakers are offering for City winning the thing.

From a team who only had 35% possession and lost in front of their home fans to one that had 31% and won.

West Ham, who hadn’t won in the league since the end of September, have beaten the champions, Chelsea, effectively ending any chance Antonio Conte’s side had of retaining their title.

The only goal of the game came in the sixth minute. Marko Arnautovic ending a dry spell that stretched back eight months to score his first goal for the Hammers after a cute one-two with Manuel Lanzini.

And then the bus moved in.

West Ham did what West Ham had to do to cling on, and Adrian, in the team ahead of Joe Hart, was brilliant at the back preventing Chelsea’s talented forwards from registering.

The bookies move the Champions out to a 33/1 long shot.

Swansea ensured they only spent one week at the foot of the table after beating West Brom at home by a goal to nil. It wasn’t a classic. You would have had more fun watching a garage door opening and closing, but it was a massive three points for the Welsh side.

Both teams came into this tie in horrid form. Swansea hadn’t won a game in seven (including six defeats), and the Baggies hadn’t won in 13 attempts (after winning their two opening ties).

Swansea was always going to struggle in attack after losing Gylffi Sigurdsson and Fernando Llorente, but nobody would have expected them to have had fewer shots on goal than any other side in Europe’s top five divisions.

Thankfully, an old favourite seems to have found his scoring boots. Before last week’s strike against Stoke, Wilfried Bony had only scored once in his previous 28. The Ivorian doubled that tally with a 81st-minute thunderbolt after West Brom failed to clear their lines from a corner.

And it could have been two had Tammy Abraham not tried to lob the onrushing West Brom keeper when a simple pass to Luciano Narsingh would have left the Dutch winger with an open goal.

Swansea moves ahead of Palace by a single point after the Eagles drew at home to Bournemouth, and West Brom drops down to 17th, only escaping the bottom three on goal difference.

Despite the win, Paul Clement remains 5/4 to be the next Premier League manager to lose his job.