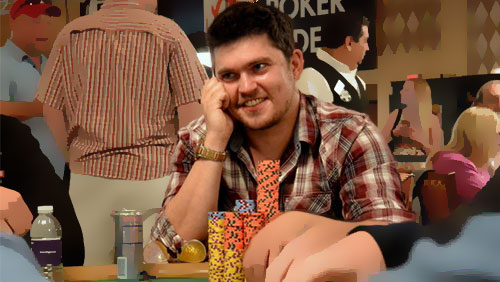 Maurice Hawkins needs to shift over, Valentin Vornicu needs some space on the podium.

The World Series of Poker Circuit (WSOPC) gold ring vacuum cleaner made it number ten after jetting into Lake Tahoe in time to register for the last event of the 12-ring series, which he promptly won for $14,429.

Vornicu won a $365 one-day event to tie with Hawkins at the top of the all-time gold ring leaderboard.

The victory was even more impressive as Vornicu was in the Czech Republic competing in the World Series of Poker Europe (WSOPE). It wasn’t a fruitful trip with only a 14th place finish in the €1,100 No-Limit Hold’em Monster Stack to show for his air miles.

Vornicu has earned over a million bucks playing live tournaments. His biggest score came last season when he finished 23rd in the WSOP Main Event for $269,430.

It’s the largest Main Event since 2011 when Elio Fox bestest a field of 593 entrants in Cannes on his way to a €1.4m first prize, vindicating the WSOP’s decision to put its faith in the King’s Casino for the foreseeable future. The mammoth field also ensured the €5m Guarantee was also met.

The most notable name in the Top 10 chip counts is the World Poker Tour (WPT) Champions Club member, Alexander Lakhov who bagged and tagged 424,000. The Italian Gianluca Speranza sits in sixth with 408,500, and the leader is Vishal Maini with 651,500.

From tales of joy to one of devastation and the UK poker pro, Emma Fryer has died on the eve of what she told friends was the biggest event of her life.

Fryer was in the Czech Republic to compete in the WSOPE €10,000 Main Event when she was involved in a car crash on her way to the King’s Casino in Rozvadov.

The former poker and casino VIP account manager for Bet365 had been racking up small scores on the UK circuit since 2011 but hit the big time a month ago finishing third in the DTD1000 for £47,500, and second in the Genting Main Event Mini-Series in Sheffield for £7,000.

UK grinder Matt Davenport told PokerNews UK that he spoke to Fryer the night before her tragic accident, and she said him she was looking forward to playing ‘the biggest event of her life.’

She leaves behind her partner, Gary, and two daughters Gemma and Jess.