Oklahoma, Michigan look to bounce back from losses as solid favorites

The Oklahoma Sooners (4-1) were ranked third in the country behind one of the Heisman Trophy favorites and appeared poised to make it back to the College Football Playoff for the second time in three years.

However, a 38-31 home loss to the Iowa State Cyclones has made Saturday’s Red River Rivalry game against the Texas Longhorns (3-2) in Dallas a must-win for the favored Sooners and senior quarterback Baker Mayfield if they want to keep their national championship dreams alive.

Oklahoma is an 8-point favorite versus Texas at the Cotton Bowl after opening at -7.5.

Mayfield’s Heisman chances took a small hit in the setback to Iowa State, but he still remains one of the top signal-callers in the country. In fact, he is the only one ranked in the Top 20 nationally in passing yards who has yet to throw an interception. 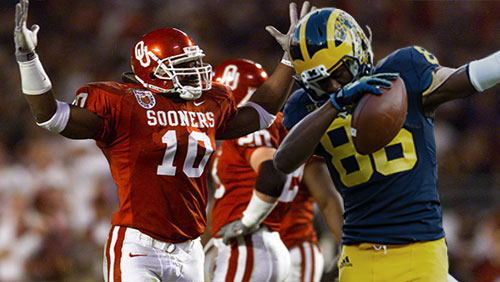 However, the Longhorns picked him off twice in a 45-40 loss to the Sooners last season, helping them cover the spread for the fourth year in a row as 13.5-point underdogs. Sportsbooks may need a similar result if bettors continue to back Oklahoma.

Meanwhile, the Michigan Wolverines (4-1) also suffered their first loss last Saturday, falling at home 14-10 to the Michigan State Spartans (4-1) as 12.5-point chalk. The Wolverines now travel to Bloomington to square off with the Indiana Hoosiers (3-2) as 7-point road favorites after opening at -5 in the first of two straight Big Ten games away from home.

Michigan has a showdown with the unbeaten Penn State Nittany Lions (6-0) on deck in two weeks, making this a dangerous look-ahead spot for those thinking about betting on the Wolverines.

The Hoosiers hung around with the Ohio State Buckeyes for a half in their season opener before losing 49-21, and they also lost 45-14 to the Nittany Lions on the road two weeks ago. Books will likely need the home dogs here.

The Buckeyes (5-1) benefitted the most from the Sooners and Wolverines both losing, jumping back into the Top 10 as each of them fell out. Ohio State has won four in a row since losing to Oklahoma at home, averaging 52.5 points and outscoring opponents by 42 points per game.

This Saturday, the Buckeyes visit the Nebraska Cornhuskers (3-3) as 24.5-point road favorites, up slightly from the opener of -24. Nebraska is coming off a 38-17 home loss to the Wisconsin Badgers as a 12.5-point home dog, dropping the team to 2-4 ATS this season. Again, books will probably need the Cornhuskers.