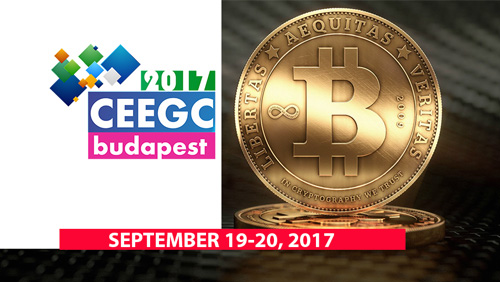 25 July 2017, Budapest: The organizers of CEEGC2017 are excited to announce a new panel on the Agenda which will aim towards giving updates and advices about the role of Bitcoin and cryptocurrency in the online gambling industry. The Central and Eastern European Gaming Conference is going to take place between 19-20 September at the Kempinski Corvinus Budapest.

In their press release, the organizer expressed feelings that they are certain that if you open up your internet browser, listen to the radio streams or just watch the news on TV, a new piece about Bitcoin or any other cryptocurrency will pop up.

And if you are in the online gambling industry, no doubt you’ve heard about how the industry is embracing Bitcoin. Cryptocurrency is not a new thing, as a matter of fact, in 1998, Wei Dai published a description of “b-money”, an anonymous, distributed electronic cash system which shortly thereafter, was followed by “Bit Gold” created by Nick Szabo. Just like bitcoin and other cryptocurrencies that would follow it, Bit Gold was an electronic currency system which required users to complete a proof of work function with solutions being cryptographically put together and published. A currency system based on a reusable proof of work was later created by Hal Finney who followed the work of Dai and Szabo.

The first decentralized cryptocurrency, bitcoin, was created in 2009 by pseudonymous developer Satoshi Nakamoto. It used SHA-256, a cryptographic hash function, as its proof-of-work scheme. Many other cryptocurrencies have been created though few have been successful, as they have brought little in the way of technical innovation. On 6 August 2014, the UK announced its Treasury had been commissioned to do a study of cryptocurrencies, and what role, if any, they can play in the UK economy. The study was also to report on whether regulation should be considered.

It didn’t take much time for the online gambling industry to eye out the possibilities of adopting Bitcoin and this has lead to a total of 4.5 billion in BTC to be wagered since 2014.

Bitcoin gambling has continued to rise in popularity over the years. Many people believe Bitcoin is the perfect currency for online wagers and cryptocurrency-based gambling statistics have shown that the market agrees.

It is clear that Bitcoin gambling is just one of many excellent platforms that demonstrates the cryptocurrency’s real-world use cases. Using bitcoin has allowed for more privacy-centric gambling, alongside quicker ways to fund casino accounts, pay out jackpots and reward players. Online gambling is a huge industry with a volume of $45.86 billion in 2016 and Bitcoin has captured just a tiny fraction of this market so far.

This is why the team at EEGEvents has designed an exclusive panel for the second edition of Central and Eastern European Gaming Conference in partnership with BitMalta.

The panel will be moderated by Joseph F. Borg – VICE-PRESIDENT of BitMalta and Senior Advisor to WH Partners

Dr. Joseph F. Borg is currently a Senior Advisor to WH Partners, a law firm specialising in Gaming, Corporate, IT, Telecoms and Intellectual Property Law. He also lectures Gaming Law at the University of Malta and is the Secretary General of the Malta IT Law Association. Before joining WH Partners he occupied the post of Chief Regulatory Officer of the Lotteries and Gaming Authority – Malta. Joe was also an elected Member on the Board of Trustees of the International Association of Gaming Regulators (IAGR), a position which he held throughout 2012. He had originally joined the Authority in March 2007 as Director Legal and Enforcement and has occupied this position for almost 4 years. Before joining the Authority, Joseph, acted as a Legal Counsel to Vodafone Malta Limited for three years.

Joseph was conferred with an LL.M. in Information Technology and Telecommunications Law at the University of Strathclyde (Glasgow), with Distinction. Earlier, he was awarded the LL.D. from the University of Malta, after writing and successfully defending a thesis entitled, ‘Protection of Trademarks Against Domain Names’. In 2009 he completed a Regulator Development Program organized by the International Gaming Institute at the University of Nevada in Las Vegas (UNLV). In 2012 he was awarded a certificate in Casino Management by the UNLV.

The speakers of the panel will be announced shortly.

How to secure your seat?

Early Bird Rate is set for 299 EUR an can be booked with the 50% discount until September the 3rd, 2017. Limited seating! (Online payment, Bitcoin or Bank Wire Available)

*25 operators can attend the event for free! Contact the organizers for more details

Watch this space for more interesting updates about #CEEGC2017Budapest

A new report from the casino guide Casino.se: How the new gaming law has affected the Swedish gaming industry
Press Releases
11 hours Ago

FIFA and NBA2K among new games added to Luckbox
Press Releases
13 hours Ago
.