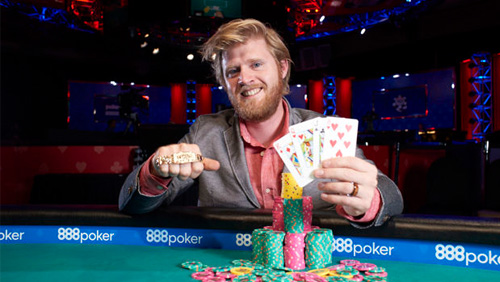 Another peek under the covers at the 48th Annual World Series of Poker including a first gold bracelet for the aptly named Nathan Gamble, and Phil Hellmuth goes after bracelet #15 in the $10k Stud Hi-Lo 8 or Better Championship.

When it comes to the best-suited surnames for poker Nathan Gamble is right up there with Chris Moneymaker, but there was nothing gamble like about his dominant final table performance in Event #46: Pot-Limit Omaha Hi-Lo.

The 27-year old from Texan went on a malevolent rampage on the final table, snapping people out of their dreams like twigs in a cold, harsh winter, ending up with a 10:1 chip lead against Adam Hendrix in heads-up action.

It was a somewhat inexperienced final table considering the field size of 830 players, a 13% increase on the 2016 field. Ray Henson and Millard Hale III were both World Series of Poker Circuit (WSOPC) gold ring owners, but Henson had to settle for third – the same position he took in the inaugural Colossus – and Hale’s journey ended in eighth.

The star name on the final table was the two-time bracelet winner, Marco Johnson, who Gamble eliminated in fifth after his 7h7c3h3s flopped a set in an all-in and call against As4dKsJs.

The heads-up encounter with Hendrix lasted a single hand, after which Gamble took his seat for his winner’s photo, and signalled for his father to join him.

“This is for my Dad,” said an emotional Gamble who learned all he knows about PLO from the man who provided him with his perfect surname.

Other players who played poker in this one until all there was nothing on the TV screen except the scary static from the Poltergeist movie was the WPT Championship Club member Kevin Saul (11th), the two-time bracelet winner Barny Boatman (12th), and the Robin Hood of poker Barry Greenstein (14th).

The $1,500 MONSTER STACK event has waved bye-bye to the molecular world of starting flights. The event attracted 6,716 entrants, a 3% decrease on last year’s field when the schoolteacher Mitchell Towner gave us media folk a fairytale to weave.

Day 2 will welcome 2,030 players back to the tables and here are some of the notable big stacks in play:

And as Day 1 reaches a climax in Event #49: $3,000 Pot-Limit Omaha 6-Handed, the chip leader, is none other than Igor Sharaskin. The Russian has already made the final table of three PLO events at this year’s series, and if he takes this down will become a serious Player of the Year contender.