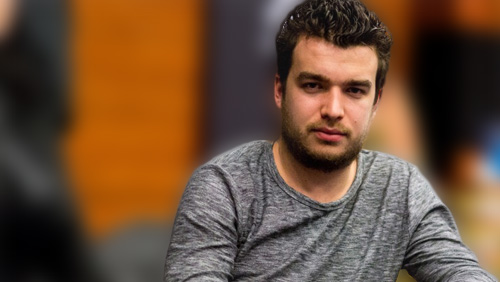 
A few days ago, Chris Moorman, won his first World Series of Poker (WSOP) bracelet nine years after he cashed in a live tournament for the very first time.

It was a long wait.

I felt compelled to send him a private message on Twitter. I hardly ever do this. Maybe it was our shared Britishness? Maybe it was his standing in the game as the world’s greatest online MTT player, ever? Maybe I was in a good mood.

“Congratulations on your bracelet win, Chris. I expect a Gus Hansen type book next.”

I had this vision of him standing by the side of his table, cleaning house, Dictaphone hanging from his bottom lip like a cigar munching Clint Eastwood.

Shooting the players down one after another. The smell of cordite staining the air.

Back in May, in an article I wrote for 888Poker, I asked 56 professional poker players to name the poker books that were the most influential for them at the beginning of their career.

But the third favourite did surprise me. It was Gus Hansen’s Every Hand Revealed, a deep and dirty look into the hands that earned the Dane the title of Aussie Million Main Event winner back in 2007.

I’m no professional poker player. But ever since reading Hansen’s book I have always made notes of every hand I played in a poker tournament in the hope that one day I miraculously pull away from my opponents like the Mallard whistling in the distance like a desolate bird.

So why isn’t anybody else doing this?

Moorman surprised everyone in 2015 when he released the poker strategy book: Moorman’s Book of Poker. Moorman enjoyed the process so much (or was stuck in a multiple book deal contract) that he wrote another (Moorman, July 2017), this time part strategy, part biography.

So if Moorman didn’t record his progress hand-by-hand, then why not?

Here is my opinion on why Gus Hansen’s book did so well, and why a Moorman book could do even better.

One of the reasons Gus Hansen’s book did so well is because he wrote it. The guy was a fucking rock star, and we all knew he approached the game in an unorthodox way.

If some random professional poker player, ranked #3 in the Global Poker Index (I picked that number at random, Justin) wrote it, then who the fuck cares?

But this is Chris Moorman, the greatest ever online MTT player with over $14m in winnings.

I haven’t read a poker book for a long time, but if my memory serves, poker players like to focus on the hands they played well, and then strategise the shit out of them.

Winning World Series of Poker (WSOP) wrist candy; ghosting through 959 entrants, and in the 6-max format, is a complicated business. By recording all the major hands, emotions, and other nuances throughout the event, the reader gets a fuller picture of what went on. When you go camping you want the mineral smell of the coal smoke; you don’t just want to see the flames.

There is much we can learn in the crap that doesn’t often make the cut.

It’s that crap that constitutes the vast majority of Moorman’s journey to the winner’s photo.

We want to smell it.

We want to touch it.

We want to experience it.

If done right, a deep and dirty look into how a top player took down a major title can be as entertaining as watching a Panda falling out of a tree followed by the canned laughter of Chinese onlookers.

Fuck the poker, Moorman probably folded most of the time – boring.

What were the conversations about at the table? Who were the idiots? Who were the inspirations? Did anyone try to ruffle Moorman’s British feathers? Did they succeed? How did Moorman handle that?

As a poker writer, who has spent many years working at the WSOP, I know my best articles come from the material I gather when playing, and not standing by the side of the table notepad in hand hoping to get in on a conversation that doesn’t involve me.

You can’t find these storylines when strategising over the 25 Best Hands I Played in This Amazing Tournament I Won.

There is not enough depth.

So, there you are, three reasons why someone as cool as Moorman should make sure they use their Notes function on their mobile phone to record every hand, every joke, and every fart in readiness for writing the next Every Hand Revealed because there is an audience out there for this kind of gem.