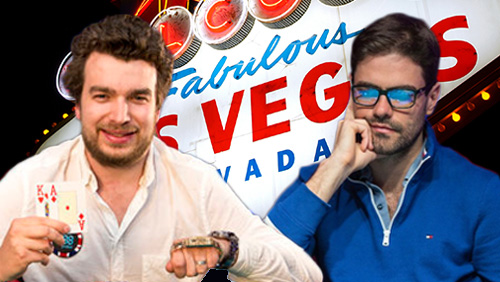 Two of the games most talented players have earned their first World Series of Poker bracelets after Chris Moorman took down a $3,000 No-Limit Hold’em event, and James Obst did likewise in the $10,000 Razz Championship.


Chris Moorman is arguably one of the most efficient No-Limit Hold’em players to traverse the online and live playgrounds, and he is now a PokerStars Championship away from a Triple Crown after winning his first World Series of Poker (WSOP) bracelet in Event #27: $3,000 No-Limit Hold’em 6-Handed.

It was the first British bracelet of the series and one that arrives after 20 WSOP cashes, four final tables, and two runner-up finishes. Moorman came into the final day fourth in chips, with fellow countryman Max Silver leading the way.

The last time this pair clashed in a WSOP Final Table was in the 2011 World Series of Poker Europe (WSOPE) Main Event, an event Moorman looked the likely champion before losing out to Elio Fox in heads-up; Silver finished eighth.

Moorman would once again outlast his compatriot, only this time he would go all the way. His heads-up encounter with the Brazilian Bernardo Dias lasted three hours, but Moorman never relinquished the chip lead at any point during that brawl.

The 888Poker Ambassador has now won over $14m playing online, and $5.1m playing live including a World Poker Tour (WPT) title. It’s ridiculous to think that people once questioned if Moorman could bring his online game to the live arena.

And let’s hope that Moorman had his Dictaphone on him.

Now he is an accomplished author, with his second book planned for a WSOP release in July, one hopes we can get to see a Gus Hansen style Every Hand Revealed book chronicling his play during one of his career highlights.

Moving swiftly from one online genius to another and James Obst has won his first bracelet in Event #26: $10,000 Razz Championship, and you have to say, it’s been coming.

According to data pinched from PokerNews, Obst has made the final two tables of eleven events, making the final table six times. What’s sets Obst and Moorman apart, and why Obst will surely go on to win more gold than the Brit, is his ability to play at a high level in all the games.

At 26-years old, the Australian has the capability to rack up WSOP bracelets at the same rate he has eaten up PokerStars Championships of Online Poker titles (COOP).

The event attracted 97 entrants, three players down on last year’s century. The final table contained a few powerhouses, including the former WPT Player of the Year, Anthony Zinno, and Obst is now in line to win the WSOP version after his tough heads-up victory over Eric Kurtzman.

“I’m interested in trying to contend for it (WSOP POY),” Obst told PokerNews. “But you know at the end of the day I’m not going to be multi-tabling events or doing anything crazy to try to win it. I’m trying to hold on to my money and make more of it.”


Obst has already cashed in five events this summer and was making his second final table after losing out to Jesse Martin in the $2,500 Mixed Triple Draw Lowball event. He sits second in the WSOP POY Leaderboard, behind Canada’s Pablo Mariz.