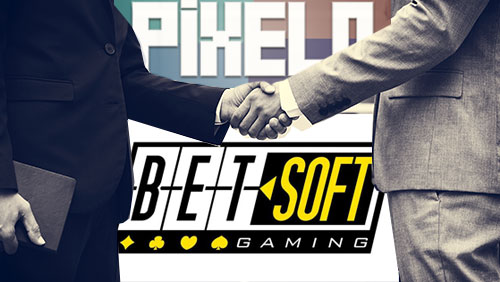 Leading 3D iGaming supplier Betsoft Gaming have announced that they have signed a partnership deal with Italian platform Pixelo.

“Pixelo is a young and rapidly expanding company, and with the launch of new games we are approaching our growth target in the field of online platforms and consolidation of our leading position at a national level,” said Cristina Ferrario, Pixelo Sales Director.

Starting from today, Betsoft games will be available for all Pixelo players.

“I am really proud to partner with Pixelo,” said Julian Camilleri, Betsoft Sales and Account Manager. “This newly signed deal is a significant part of Betsoft’s concentrated push into the Italian market.”

The first licensee to go live with Betsoft’s games will be Poker&Bet. With the addition of Betsoft’s premium iGaming content, their complete and engaging selection of games in both mobile and desktop version will be further extended and enriched.

The content will be available on line on www.overplus.it.

Betsoft Gaming, broadly known as the innovator and leader of true 3D cinematic gaming, is a Tier One developer and provider of complete system online gaming software. With a game library of over 180 games including the iconic Slots3™ series, Betsoft Gaming has met and exceeded the quality found in console video games and animated feature films. Starting in 2012, Betsoft initiated a concentrated push into the mobile gaming sector, with many of their popular Slots3™ games becoming available as the ToGo™ collection. Betsoft began releasing the highly anticipated Slots3™ Interactive™ line of games in mid-2013, representing the future of online slots gaming. Betsoft Gaming’s extensive portfolio of clients includes some of the top gaming operations in the industry.