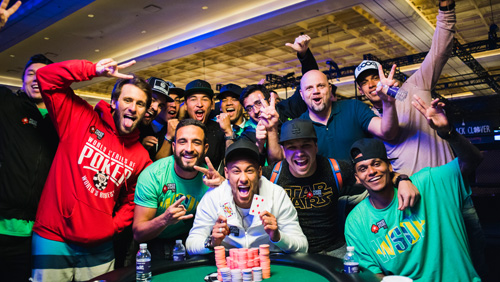 ONCHAN, Isle of Man – March 2017 – Team PokerStars SportStar and football legend Neymar Jr has invited stars from the world of sport, stage and screen, as well as fellow members of Team PokerStars, to a social, charity poker home game in Spain today to benefit the Neymar Jr Institute and Right To Play. Diego Garcia Bello from Galicia, Spain, will be joining the superstar footballer and friends for his first ever live poker tournament after winning his place in the home game for free at PokerStars, an Amaya Inc. (Nasdaq: AYA; TSX: AYA) brand.

“I am more than happy and delighted with this opportunity,” said Bello. “This is amazing! It will be my first time playing live and on top of that I will be sitting with Neymar. It is absolutely great!”

Last Friday, Neymar posted via Facebook: “I love poker so I’m playing a game with my friends and celebrities to raise money for my charity, the Neymar Jr Institute. See highlights on Facebook on March 17 and watch me bluff my friends.”

The Facebook post has already amassed over 560,000 views to date. Fans will be able to see all the action from the star-studded home game in a video posted from noon tomorrow on Neymar Jr’s Facebook page.

For a chance to participate for free in the Neymar Jr Charity Home Game and join one of the biggest names in Brazilian sport, poker players and fans with a PokerStars account were invited to take part in a free online tournament on PokerStars on March 11, where the top 10 players were eligible to win the prize package. The winner was identified through a video submission competition answering the question: “Why do you want to play poker with Neymar Jr?” You can watch winner Diego Garcia Bello’s video here.

Neymar and his friends will each be playing for a slice of the €50,000 prize pool and will donate their prizes to Neymar’s own charity, The Neymar Jr Institute. Fatima Moreira de Melo and Andre Akkari will be playing for children’s charity Right to Play.

The Neymar Jr Institute was established in 2014 and aims to help thousands of underprivileged children and their families from São Paulo by providing sports and school activities to develop skills that have an effective impact on their quality of life, helping to overcome social problems such as violence and crime.

PokerStars operates the world’s most popular online poker sites, serving the global poker community. Since it launched in 2001, PokerStars has become the first choice of players all over the world, with more daily tournaments than anywhere else and with the best online security. More than 165 billion hands have been dealt on PokerStars, which is more than any other site.
PokerStars is the flagship brand of Rational Group, which is ultimately owned by Amaya Inc. (Nasdaq: AYA; TSX: AYA) and operates gaming-related businesses and brands, including PokerStars, PokerStars Casino, BetStars, Full Tilt, StarsDraft, and the PokerStars Championship and PokerStars Festival live poker tour brands (incorporating the European Poker Tour, PokerStars Caribbean Adventure, Latin American Poker Tour and the Asia Pacific Poker Tour). Amaya, through certain subsidiaries, is licensed, approved to offer, or offers under third party licenses or approvals, its products and services in various jurisdictions throughout the world, including in Europe, both within and outside of the European Union, the Americas and elsewhere. In particular, PokerStars is the world’s most licensed online gaming brand, holding licenses or related operating approvals in 17 jurisdictions. PokerStars.com and PokerStars.eu operate globally under licenses from the Isle of Man and Malta governments, respectively.