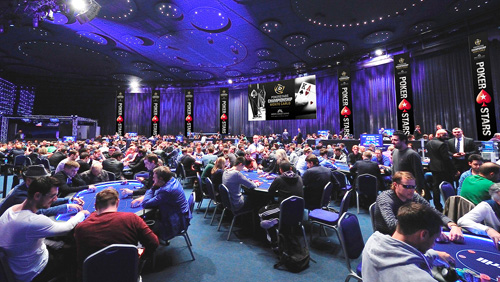 ONCHAN, Isle of Man – March 2017 – More than €30 million in prize money is expected to be paid out by PokerStars, an Amaya inc. (NASDAQ: AYA; TSX: AYA) brand, at the upcoming PokerStars Championship presented by Monte-Carlo Casino®, which takes place from April 25 to May 5, 2017. The total cash winnings expected across the course of all 71 PokerStars sponsored tournaments has been boosted by more than $2.5 million in guaranteed prize pools, including $1 million guaranteed in the €1,100 PokerStars National Championship, formerly known as the France Poker Series (FPS) Main Event.

“This season’s PokerStars Championship in Monte Carlo promises the ultimate and complete gaming experience, and not just for those who are regular travellers to the home of the Grand Prix for poker action, but for every kind of player looking for a memorable poker experience,” said Edgar Stuchly, PokerStars Director of Live Events.  “While our Championship events attract some of the best players in the world,  this event will see a wide range of tournaments on offer for players of all levels, giving everyone a chance to compete. Players can qualify now at PokerStars from just €2.20, and soon there will also be packages worth over €8,500 up for grabs in special edition Spin & Go tournaments. We look forward to seeing thousands of players at our first Championship stop in Monte Carlo.”

Monaco is home to Casino de Monaco – one of the oldest and most famous casinos in the world. PokerStars Championship Monte Carlo is held in collaboration with Casino de Monaco and will attract some of the world’s finest poker players and high rollers. Last year, the FPS event had a total of 1,261 entries (without the re-entry flight option) and last year’s Monte Carlo Main Event had a total of 1,098 entries.

ONLINE AND LIVE ROUTES TO LIVE POKER IN MONTE CARLO

In addition to this, satellite tickets to PokerStars Championship Monte Carlo will be available on selected tables at PokerStars during the Tuesday, Wednesday and Thursday MTT majors for three weeks from March 14. Players who buy their seat early for the PokerStars National Championship or PokerStars Championship Main Event before April 1 will be eligible to take part in Live Freeroll Flipouts that award the top two their buy-ins back. The flipouts will be organised at 11:30am on respective Day 1A’s.

Players must be quick to take advantage of a massive 33% discount (€931 saving) on accomodation at the Monte-Carlo Bay Hotel and Resort for PokerStars Championship Monte Carlo with the Monte-Carlo Hotel Early Bird promotion running from today, March 13 until March 20. Please note this offer is limited to the first 50 players.

On top of this, any player taking part in the PokerStars sponsored National Championship who has previously won an FPS Main Event tournament in the past will automatically be entered into a special PokerStars Last Longer with a €1,100 PokerStars Live Event credit up for grabs.

Whilst poker will take centre stage during PokerStars Championship Monte Carlo, there will be no shortage of entertainment throughout with the unmissable Player Party taking place at Blue Gin Bar bar on April 29 from 9pm, and #StarsFun activities and fun competitions, including the daily virtual reality high score leader board.

The cash game room will be busy during the event with experienced dealers running tables nearly 18 hours a day.

The schedule for PokerStars Championship presented by Monte-Carlo Casino® features a wide variety of games and buy-ins (from €60 to €100,000) to suit players of all levels, and a range of guarantees. Highlights include: