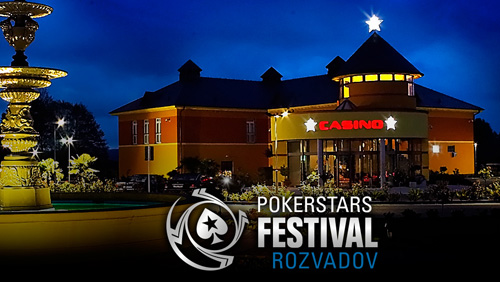 From March 2-13, Rozvadov, a small municipality in the Czech Republic, will be ho

Players can satellite into the Festival from as little as €1.10 on PokerStars.com and PokerStars.eu with qualifiers running until March 5. Multiple daily €1.10 phase tournaments are currently running, until February 26 when an €82 re-entry Special Qualifier with 20 seats guaranteed will take place.

PLAYER ACTIVITIES OFF THE FELT

As well as exciting poker action at the tables, there will be plenty of other activities for players to enjoy including a special StarsFun Power Hold’em tournament on March 8, daily virtual reality experiences in the Player’s Lounge, and the Player Party at the King’s Casino on March 10 from 9pm. There will also be a 24-hour buffet available every day, PokerStars merchandise, and shuttles to and from hotels throughout the event for all players. Players can also take advantage of cash game tables at any time of the day.

In addition to all of this, Team PokerStars Pros Bertrand ‘ElkY’ Grospellier and Marcin Horecki, and Team PokerStars Pro Online member and Twitch hero Jaime Staples will all be in attendance to give players a run for their money.  Players will also have the chance to have their poker questions answered at an unmissable, live streamed Q&A session with ElkY and Staples. The session will be introduced by poker evangelist, Lee Jones, and held in the Player’s Lounge at King’s Casino on March 11 at 1pm.

“I’m very excited about going to Rozvadov to participate in my first-ever PokerStars Festival there,” said Elky. “The King’s Casino is a great venue for PokerStars Festival Rozvadov. King’s Casino owner Leon Tsoukernik, his team and PokerStars staff have been working relentlessly to ensure that all the players have an exceptional all-round poker experience. The festival will feature non-stop poker action, a variety of tournaments suitable for all players, as well as loads of fun activities when you’re away from the poker table, like the Q&A about Twitch we will be having with Jaime, which you can attend live or watch online.”

In 2015, Eureka Rozvadov had a total of 682 registered players for a combined prize pool of €661,540 making it the biggest PokerStars sponsored live event ever held in Rozvadov.