Home / Poker / 5 For 5: Advice for people living with ADHD that want to play poker 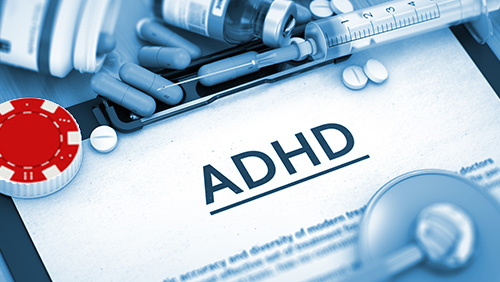 In this week’s 5 for 5 column, five professional players offer five pieces of advice to people living with ADHD looking to have a game of poker.


According to data robbed from the Centre for Disease Control & Prevention (CDC), 11% of children aged 1-17 years have been diagnosed with Attention Deficit Hyperactivity Disorder (ADHD) since 2011.

That’s a lot of people – 6.4 million to be exact – and one of them is a buddy of mine who recently reached out for help. Invited to a poker game he can’t turn down, he is worried about his ability to concentrate so asked me for advice.

If you have a combination of these five issues, then you very likely have ADHD.

1. A persistent pattern of inattention and/or hyperactivity-impulsivity that interferes with functioning or development.

•  Fidgets and squirms in their seat.
•  Leaves their seat when remaining in their seat is expected.
•  Runs about and climbs when it’s inappropriate.
•  Always on the go.
•  Talks excessively.
•  Loses things.
•  Has difficulty waiting for his or her turn.
•  Often interrupts or intrudes on others.

2. Several inattentive or hyperactive-impulsive symptoms were present before age 12.

3. Several inattentive or hyperactive-impulsive symptoms are present in two or more settings.

4. There is clear evidence that the symptoms interfere with, or reduce the quality of social, academic, or occupational functioning.

5. The symptoms do not occur exclusively during the course of schizophrenia or another psychotic disorder and are not better explained by another mental disorder.

So as I jumped in the car and headed to the doctors to secure a pukka diagnosis, I asked five pieces of prime pieces of British beef to provide advice to my buddy, and this is what they had to say.

Rather than ‘popping a pill’ to solve your problem, why not try and Do The Work? Educate yourself on the way the mind works and learn new techniques that enable you to chill.

One avenue is to learn about Mindfulness. Join blogs like Leo Babauta’s Zen Habits. Read books like Clarity and Results by Jamie Smart, and watch podcasts like my interview with mindfulness expert Hugh Byrne.

“You are already mentally healthy; psychologically whole and resilient. The source of emotional intelligence is already right there within you. The only thing that ever gets in the way is the mistake belief that we’re feeling something other than THOUGHT IN THE MOMENT.” -Jamie Smart


Meditation and Mindfulness are aligned. I practice Transcendental Meditation (TM) two times a day for 20-minutes morning and evening. But there is a multitude of different techniques. One great resource is the app Headspace because you can listen to it when you are playing .

Here is Kat Arnsby on meditation:

“Get him to meditate to a specific piece of music that he enjoys and focus on the calm for the length of the song, he can then play that song at the table when he feels fidgety will help him return to more relaxed state.”


And if you can’t meditate?

“Smoke a joint, that always stops me getting bored.” Said Arnsby.

Moving away from Arnsby’s suggestive use of drugs and sticking with her musical therapy idea:

“Music helps,” said partypoker Ambassador Roberto Romanello, “Use it to get through the early stages. When blinds are big, it will get more exciting. He can start picking spots to get more aggressive and find that big flip and win the game.”

Former professional footballer and occasional X-Factor winning coach, male model and pro poker player, Steve Watts, suggests that the best way to calm down when playing poker is to get a massage:

“Tell him to get a massage,” said Watts.


Nina Jablonski, Professor of Anthropology at Penn State University explains why Watts is onto a winner with his massage theory.

“You can change neurochemicals by taking drugs, but you can also alter brain chemicals by affecting systems that in turn affect the brain. For example, exercise and caring touch both release endorphins and reduce cortisol. And you can boost oxytocin through caring touch.”Jablonski wrote in her book Skin: A Natural History.

“Look for shorter-ring games or heads-up play,” said Saxby. “It’s easy to daydream at a nine-handed table with blinds increasing every hour, but in short-handed games, you are forced to act rapidly in every hand.”

Dan O’Callaghan, also believes game selection is of paramount importance, and my friend should listen to him because he has ADHD.

“Poker is lots of ‘nothing’ followed by brief periods of action,” said O’ Callaghan. “Heads up is different. You’re involved more. You could even make side bets to increase the fun element. Play red or black or have a chat and slag Trump off for a bit. Make sure you always have lots of things to focus on and try and play in faster-paced games.”

Sticking with the ‘do stuff’ theory, Kelly Saxby believes you should counter the boredom by always paying attention even when you aren’t in a hand.

“You need to pay attention to your opponent non-stop. Think about their bet-sizing, try to put them on a range of hands, do they check/raise draws or pot control until they hit? Take a moment to talk yourself through each decision.”

So there are five tips from five pros to help my buddy manage is ADHD when playing poker, now it’s your turn – what advice do you have?

Many thanks to Dan O’Callaghan, Steve Watts, Roberto Romanello, Kelly Saxby, and Kat Arnsby for their help with this article.