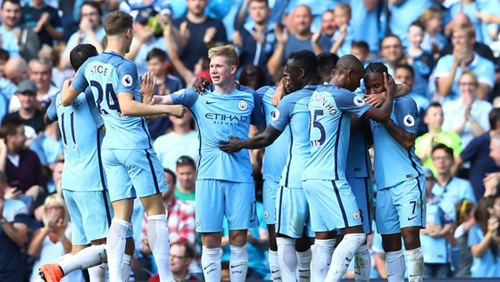 We round up the last match of Week 25 of the English Premier League with Manchester City beating Bournemouth 2-0 at the Vitality Stadium.

Manchester City is now eight points behind the leaders Chelsea after a 2-0 triumph away at Bournemouth and must now rank as the primary challenger for the title despite Pep Guardiola writing off his team’s chances after their 4-0 hammering at the hands of Everton in mid-January.

Raheem Sterling opened the scoring in the 29th minute after some great work from David Silva and Leroy Sane, a trio who have a touch of the Barcelona about them when on top form.

Another player who fits that description is Gabriel Jesus. The young Brazilian kept Sergio Aguero on the bench for the third straight game but was replaced by the Argentinean in the 14th minute after he limped off with an injury. And it was pressure from Aguero that led to Tyrone Mings putting the ball past Artur Boruc to seal the win for City in the 69th minute. It was the young defender’s second own goal since returning to the side from a lengthy spell on the sidelines with injury.

The Blues are now undefeated in five games, in all competitions, since that humiliating defeat to Everton at Goodison Park. They face Chelsea at Stamford Bridge in a vital clash on 5 April. With Arsenal, Liverpool, and Spurs lacking the Premier League winning mentality, only the red and blue halves of Manchester can seriously threaten Chelsea for the title.

And it’s not all over.

City came back from a similar points deficit when they beat United to win the title in 2011-12. Back then, they had six games to achieve the impossible; now they have 13.

Bournemouth, on the other hand, have a touch of the Leicester City about them. They have only earned two points in 2017, have failed to win in seven, and find themselves to losses away from the bottom three.